Today's winner is from Switzerland.

Driver Robert Ziegler, 37, found himself stranded near the peak at Bergun, Switzerland, after he was directed [by his satellite navigation system] up a 'glorified goat track'.

Unable to go forward or turn around to go back the way he came, he was forced to call the emergency services. 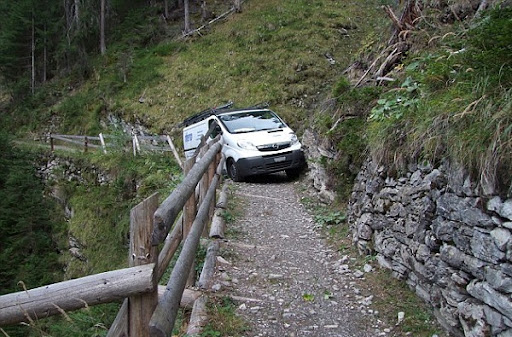 Rescue workers scrambled a heavy lifting helicopter to carry the van and its driver to safety after he dialed for help on his mobile phone.

'I was lost and I kept hoping that each little turn would get me back to the main road. In the end it told me to turn around but of course I couldn't by then,' Mr Ziegler told police.

A fire brigade spokesman said: 'He claims he didn't see any footpath signs but he must have been a pretty fair driver to get that far up a glorified goat track.'

This is far from the first case of which I've heard, where a driver steadfastly concentrated on his GPS system instead of looking out of the bloody window! How one can be so blind to one's surroundings escapes me . . . but in this case, it seems the driver was eventually forced to notice them!

He's lucky that the Swiss overbuild things, because that truck could've collapsed the path causing this to be a much less amusing incident. No less a qualifier for a Doofi award, but it may have been posthumous.

Happens all the time here in Switzerland.
Especially people not familiar with the area in the mountain regions tend to trust their gps navi way to much.

Can't happen to me, i drive trains :P

They ALWAYS trust the GPS, because it 'must' know more than they do... sigh...