In New Zealand, confectioners Bullrush Chocolates set a new record for the longest bar of chocolate ever made. The Dominion Post reports:

From midnight on Friday to this afternoon, BullRush Handmade Chocolates, of Ashburton, made a 14.58-metre-long [almost 48-foot-long] chocolate bar.

It sets a new Guiness World Record for the longest chocolate bar. The previous world record was 11.57 metres long [almost 38 feet], after a chocolate bar was made in Italy in March this year. 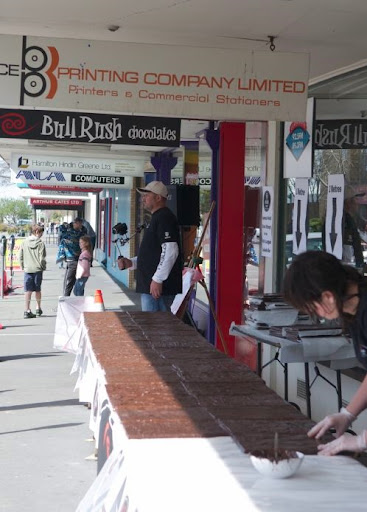 BullRush Chocolates owner Nadine Porter said officials had monitored the world-record attempt, which took six people to build it using special moulds and dark coverture chocolate. It was 49.5 percent cocoa and tasted beautiful, said Porter, who sampled a small piece of it.

Hundreds of people had stopped to witness the chocolate making, done outside the store, where a chocolate fair was also held, she said.

Porter said the store would auction off some of the chocolate bar this week. All money raised would be donated to Christchurch's earthquake victims.

It was a good effort, but overshadowed by a gargantuan bar of chocolate produced in Armenia, which was shorter, but immensely larger. The Vancouver Sun reports: 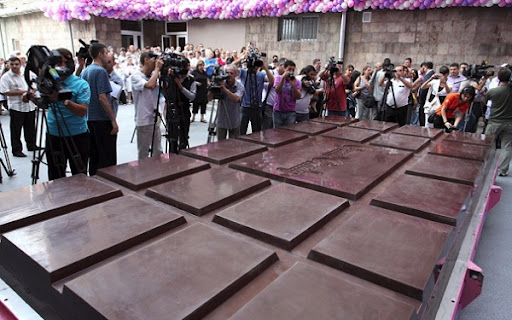 In a televised ceremony, representatives of Guinness World Records measured the dark-chocolate bar and handed a document to company managers certifying it as the new record-holder.

The record was previously held by a chocolate bar produced in Italy in October 2007 that weighted 3,580 kilograms (7,890 pounds).

Here's a video clip of the monster chocolate bar.

(And why do I suddenly feel a chocolate craving coming on?)