Remote control of the brain?


This report from the Department of Defense is . . . well . . . it may be fascinating, but it's also a bit creepy and scary, if you ask me!

Recent advances in neurotechnology have shown that brain stimulation is capable of treating neurological diseases and brain injury, as well as serving platforms around which brain-computer interfaces can be built for various purposes. Several limitations however still pose significant challenges to implementing traditional brain stimulation methods for treating diseases and controlling information processing in brain circuits.

For example, deep-brain stimulating (DBS) electrodes used to treat movement disorders such as Parkinson’s disease require neurosurgery in order to implant electrodes and batteries into patients. Transcranial magnetic stimulation (TMS) used to treat drug-resistant depression and other disorders do not require surgery, but have a low spatial resolution of approximately one centimeter and cannot stimulate deep brain circuits where many diseased circuits reside.

To overcome the above limitations, my laboratory has engineered a novel technology which implements transcranial pulsed ultrasound to remotely and directly stimulate brain circuits without requiring surgery. Further, we have shown this ultrasonic neuromodulation approach confers a spatial resolution approximately five times greater than TMS and can exert its effects upon subcortical brain circuits deep within the brain. 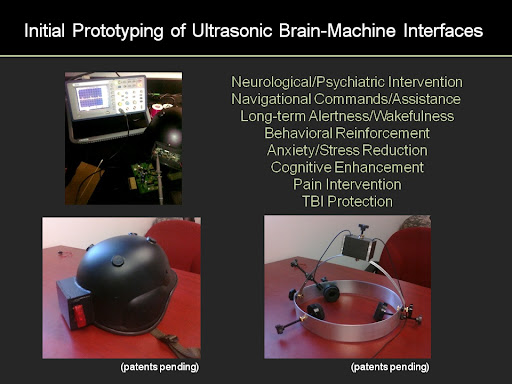 We have developed working and conceptual prototypes in which ballistic helmets can be fitted with ultrasound transducers and microcontroller devices to illustrate potential applications as shown below. We look forward to developing a close working relationship with DARPA and other Department of Defense and U.S. Intelligence Communities to bring some of these applications to fruition over the coming years depending on the most pressing needs of our country’s defense industries.

There's more at the link. The comments from readers, following the article, are also interesting.

This appears to offer fascinating possibilities in terms of enhancing interfaces between weapons systems and their operators, dealing with fatigue and other limitations, and so on . . . but isn't there a real danger that it might also be used as a control mechanism? If the wrong people got their hands on this, could it also be used to 'take over' someone, forcing them to disclose information as if under the influence of a 'truth drug', or controlling their behavior in some way?

This is a little too useful to a wannabe 'Big Brother' for my peace of mind . . .

Yeah, I find that disturbing. But I once saw a classified briefing on what the Govt. was doing on mind control, and that was even more disturbing.

It puts me in mind of my imagined combination of US research that found that a monitor could tell from your brain waves if you were about to do something you knew was wrong and Russian research on a wireless electroencephalograph. Then you could be required to wear one of those with a small explosive charge. If you were thinking of doing something wrong when you passed a monitoring station, it could fire the explosive charge.

ever seen the show, "Dollhouse"? it kept coming to mind as I read your blurb.