The Modern Day Marine expo at Quantico, Virginia, has displayed some interesting innovations in ancillary equipment for rifles. One in particular caught my eye. Britain's Ultra Sonar, known for its submarine systems, has produced what it calls a Rifle Mounted Gunfire Locator (link is to an Adobe Acrobat product brochure in .PDF format). 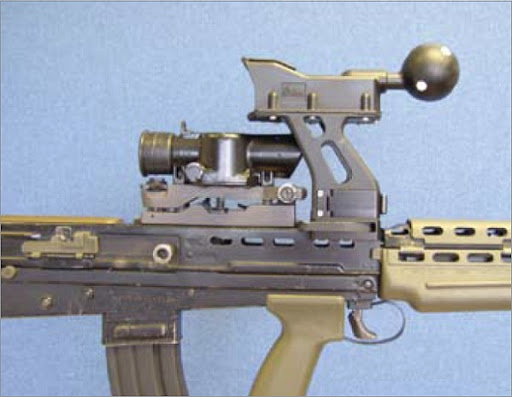 The company describes it as follows:

The Gunfire Locator sensor uses patented, frequency domain signal processing on characteristic acoustic signals to determine the range, bearing and elevation to the source of hostile gunfire. An advanced algorithm isolates the fire position in the complex battlefield environment and minimizes false alarms. Target data is intuitively displayed on the screen and using an inertial compensation system, it is continually updated to track rifle movement. The process culminates with the display and rifle pointed directly at the target.

That's a pretty nifty invention! Similar technology has been used in systems like ShotSpotter, which can be mounted on lampposts in cities to triangulate on the sound of gunfire and alert police to where it's coming from; but this is the first time (as far as I'm aware) that it's been applied to a weapon sight. The information displayed on the weapon sight is shown below.

I can see this being very useful for rapid reaction to incoming fire on the battlefield. In fact, it'll make it very dangerous to shoot at a patrol equipped with this technology, because it's a virtual certainty that one will come under fire oneself within seconds of starting to shoot. That should prove a real disincentive to aggressive types!

Ares has a report on this and another interesting rifle system. Worthwhile reading.

Looks good in the brochure. I wonder how it performs in the field? And I wonder how hard it would be to fool using some sort of distorter; I'm thinking of a barrel modifier like a suppressor to change the frequencies of a shot.

Peter, it's ONLY good for single shooter, in ambush situation or multiple fires, it just goes buggy... you need more separation on the sensor node to pick out individuals.