Ever heard of 'sea pigs'? I hadn't, until I read this article at Planet Oddity.

To the common man sea pigs may look like sea creatures produced from a cross between a pig and a slug. To some others it appears to be human fingers growing out of the creature’s mouth. But scientifically, these ugly sea pigs are scotoplanes or sea cucumbers belonging to the genus of the deep sea Holothurians. 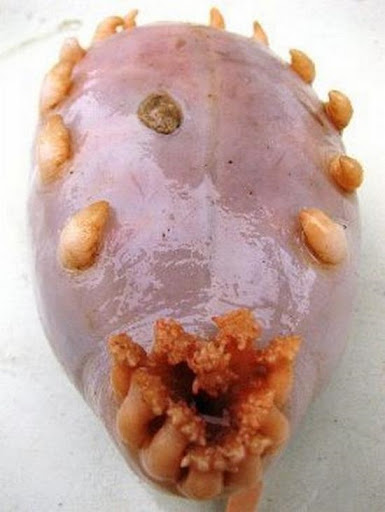 These Holothurians are marine animals that inhabit the deep sea floor. Some other examples of deep sea marine life include Sea squirt, sea stars, sea slugs, corals, clams, sponges and sea urchins. The Sea pigs may look like slugs. Their body wall skeleton is clearly visible as spiny C shaped rods and are clear cucumbers measuring 2-4 inches in length. They have tentacles and large tube feet. The tube feet may appear like two antennas, while the other tube feet are arranged in a row around the rim at the bottom.

Sea pigs thrive best on the abyssal plain of the ocean floor and behave like slugs do above sea level. The sea cucumbers feed on deep ocean mud and thrive on the organic material present there. The sea pigs feed by using their tentacles to push the food into their mouth. They tread deep sea waters using their tube feet. Other sea organisms present here are starfish, sea urchins, clams and other members of the echinodermata family. 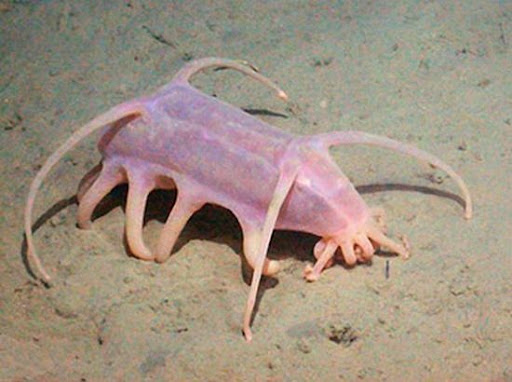 The sea pigs feed and reproduce in the depths of the ocean and form the majority of deep sea marine population. The sea pigs are not considered as a threat to humans and they are not an endangered species.

There's more at the link, including more photographs. There's also an article about them on Wikipedia, which provides links for more information.

Sea pigs are weird-looking creatures, aren't they? Wonder if they could be processed to produce a fishy equivalent of bacon? After all, smoking is used to prepare both regular bacon and other sorts of fish, so we might have a winner here!