It seems that in Burgundy, France, a medieval castle is being built from scratch, using only materials, tools and techniques authentic to the period. The Guédelon project Web site describes the project as follows:

In the heart of Puisaye, in Yonne, Burgundy, a team of fifty people have taken on an extraordinary feat: to build a castle using the very same techniques and materials used in the Middle Ages. 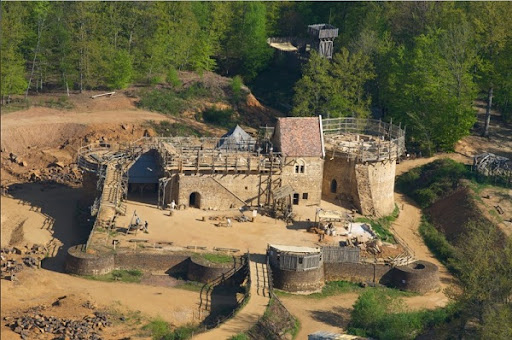 The materials needed for the construction of the castle - wood, stone, earth, sand and clay - are all to be found here, in this abandoned quarry. Before the gaze of thousands of visitors, all the trades associated with castle-building - quarrymen, stonemasons, woodcutters, carpenters, blacksmiths, tile makers, basket makers, rope makers, carters and their horses - are working together to complete the castle. 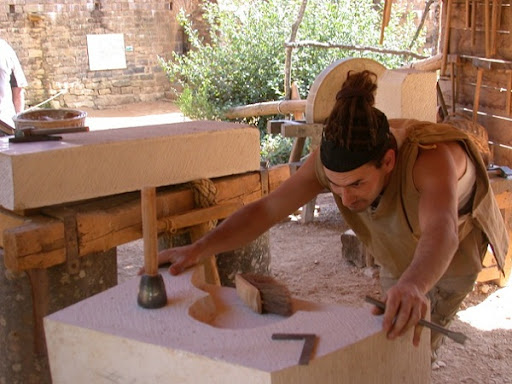 Work on the site began in 1997 and is scheduled to take 25 years to complete.

The "Middle Ages", represent over a thousand years of human history, therefore, in order to avoid confusing the different architectural styles of the age, the Guédelon venture adopted a specific chronological and historical timeframe. The start date for the castle was taken as 1229.

Louis IX, the future Saint Louis, was crowned King in Rhiems, three years ago in 1226. However, he was a mere twelve years of age and therefore his mother, Blanche of Castile, acts as Regent until 1235.

Locally, Puisaye is under the control of Baron Jean de Toucy. To the south-east lies the county of Auxerre-Nevers, controlled by Mahaut de Courtenay, and in the north the Capetian lands of Gâtinais. On the eve of the sixth crusade, Puisaye is enjoying a period of relative peace and stability.

The future castle of Guédelon is an entirely new construction; there are no vestiges of a former castle in or around the site. The castle's design is based on the architectural canons laid down by Philip Augustus in the 12th and 13th centuries. 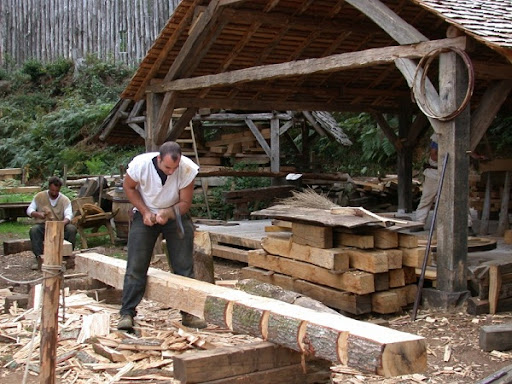 Philip II Augustus, King of France from 1180-1223, is attributed with standardising the military architecture of castles in the French kingdom. Examples of this standard plan include the Louvre in Paris, Yévre-le-Châtel castle in Loiret, or more locally, the castles of Ratilly or Druyes-les-Belles-Fontaines in Yonne. 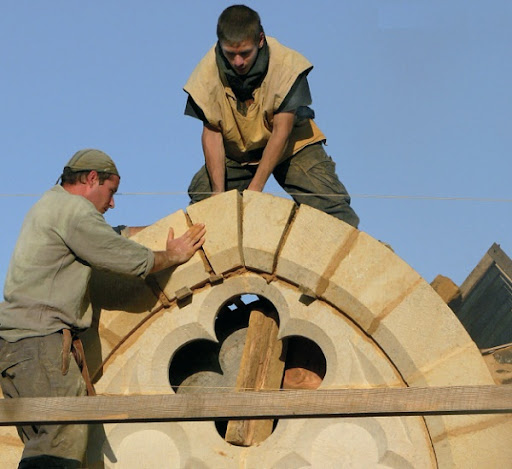 Castles built to this standard plan have the following characteristics: a polygonal ground plan; high stone curtain walls, often built on battered plinths; a dry ditch; round flanking towers pierced with arrow loops, the position of which is staggered on each floor of the tower; one corner tower, the great tower or tour maîtresse, higher and larger than the rest, acts as the donjon; a chatelet, twin drum towers protect the gate. 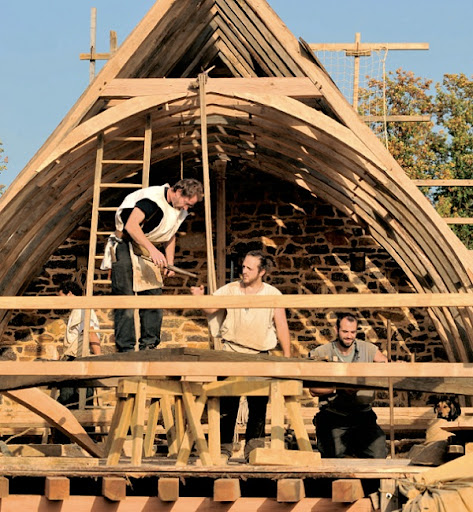 During his reign Philip Augustus established, by way of treaties, alliances and politically advantageous marriages, a long-term Capetian policy of expansion, this fact justifies the choice of a Francilien, as opposed to a Burgundian, architectural model in this particular part of France.

A scenario was created to explain the building of a castle in the Guédelon forest at the beginning of the 13th century. The man we imagine to have ordered the castle's construction, Guilbert, would have been a low-ranking nobleman, vassal to the Lord of Ratilly, himself vassal to the Lord of Perreuse, whom in turn is vassal to the Baron of Toucy. Having obtained leave to build his castle, but owing to his modest standing in the feudal hierarchy and his limited finances, Guilbert favours raising a small castle, a fortified residence, far removed from the scale of royal castles like the Louvre or Brie-Comte-Robert in Seine-et-Marne.

There's also a short video about the project. I can't embed it here, but I highly recommend viewing it at the link - particularly in full-screen mode, to see all the details. I found it very interesting, particularly the medieval tools seen in operation. Look for the human-powered treadmill lift.

That's a fascinating project! It goes on my list of places in Europe I want to see on my next visit. The site is open to visitors during summer - see the project Web site for details.

While this is cool, you don't have to go to Europe to see this kind of thing. There are people in Northern Arkansas also building a castle. My sister is taking her family there on their vacation in two weeks.
(I'd go too, but my boss doesn't like it when I don't show up for work)
It's called the Ozark Medieval Fortress. They have a website at OzarkMedievalFortress.com

Hope that helps your vacation planning.

There's a novel, can't recall the title at the moment, where a woman assassin {? DEFINITELY a woman, not certain about the assassin part}, with several degrees in Renaissance history, is building a town like this, IN France, with all the old-style methods .................. ;-)

Anonymous, the French castle was what spawned the idea for the Ozark castle! :D

"Michel Guyot, owner and restorer of the castle of Saint-Fargeau, in Burgundy (France) first had the idea of building a 13th century style fortress following the discovery that the 15th century red bricks of his castle obscured the stone walls of a much older fortress.

Last September 2008, a letter arrived in St Fargeau from America. Jean-Marc & Solange Mirat, French citizens who retired in Arkansas 20 years ago, were offering to sell a part of their estate to build a similar castle." -- http://ozarkmedievalfortress.com/en-us/construction/ozark-medieval-fortress-the-beginning