It seems a BBC experiment to test a World War II theory didn't quite go as planned.

When ideas are left on the drawing board, it is often with good reason.

But that didn’t stop the BBC testing out one of the craziest proposals of the Second World War...a boat made from ice and wood pulp.

Maverick inventor Geoffrey Pyke claimed his five and a half ton craft would both save on steel and be impossible to sink.

Yet a mock-up of his brainchild took on water and melted within minutes of its launch in Portsmouth harbour yesterday. 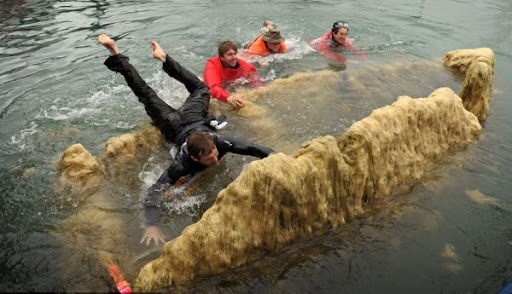 Experts said that the experiment for science show Bang Goes The Theory probably failed because the boat was too small, and so less resistant to melting, and because the water they tested in was far warmer than the Atlantic - where the invention was designed to be used.

In the event of steel stocks running out in the 1940s inventor Geoffrey Pyke suggested it was possible to make an unsinkable aircraft carrier using a material called Pykrete, made of both ice and wood pulp.

The bizarre mixture could be moulded into any shape and, with a slow melting rate, it was thought perfect for seafaring vessels.

The BBC decided to put Pyke's theory to the test by mixing 5,000 litres of water with the hefty material hemp and freezing it in a 20 feet-long boat-shaped mould.

It took three weeks to freeze it in one of the UK's largest ice warehouses, in Tilbury, Essex, before it was ready for launch in Gosport, Hants.

The team made it in to Portsmouth Harbour where they were saluted by members of the navy stationed on destroyer HMS Diamond.

But shortly after that, after just over an hour in the water, it began to take on water and capsized.

Four BBC presenters, who had hoped to make it all the way to Cowes on the Isle of Wight, had to abandon ship and swim to rescue craft.

Jon Edwards at the Royal Society of Chemistry said 'It’s hardly a surprise that the boat sank – the temperature in the Solent is probably a fair bit higher than the middle of the Atlantic, where Pyke designed his material to be used.

'He also used enormous cooling units to keep the pykrete in his tests below zero degrees centigrade. If they didn’t use those refrigerators, the intrepid ice-sailors from Bang never stood a chance.'

He added: 'The size of the boat may have added to their problems, too. A huge aircraft carrier, as Pyke envisioned, would have been more resistant to melting – a larger surface area of ice requires a lot more energy to start melting, so the non-surface ice stays cooler for longer.

'A 1000-ton test boat, built out of normal ice on a lake in the Rockies, lasted a whole summer.'

I'm familiar with Pykrete, and plans to use it in Project Habbakuk. It's one of the more fascinating and bizarre episodes of World War II . . . particularly when British Admiral Lord Louis Mountbatten, wishing to demonstrate its strength, fired a .45 pistol at a block of Pykrete during a meeting of the Joint Chiefs of Staff in Canada. It certainly proved its strength! The bullet ricocheted off it and around the room, narrowly missing a large number of very senior Generals and Admirals (grazing the leg of US Admiral Ernest King, Commander-in-Chief of the US Navy and Chief of Naval Operations, in the process), and ended up in a wall. One gathers that the demonstration was . . . ah . . . somewhat less than well received!

It appears, from experiments at the time and subsequent research, that the concept of immense Pykrete 'aircraft carriers' would, indeed, have worked: but the investment required was so great, and the demand for materials from other sectors of manufacturing so great, that it proved impracticable.

I think mythbusters did this experiment as well, except with pulped paper and ice... and it worked for a while...

Mikael beat me to it. Yes, the Mythbusters tested this on a similar scale and got a working boat for about 30 minutes. Here's a youtube vid of their results.

Another beautiful, elegant theory dashed on the ragged rocks of reality.