Talk about a living miracle!


I'm amazed to read of the strength of will and determination shown by a Canadian woman in the face of adversity.

Three years ago, [Janis Ollson] was pregnant with her second child and had been suffering years of horrible back pain when Canadian doctors diagnosed her with bone cancer, chondrosarcoma.

Sarcoma experts in Toronto said they'd literally have to cut her in half to get at the untreatable cancer, remove her leg, lower spine and half her pelvis.

The problem was they didn't know how to put her back together again.

They certainly didn't know how she would have a decent quality of life. They consulted with the Mayo Clinic and the Rochester, Minn., doctors decided to try something new.

Ollson became the first person to receive a "pogo stick" rebuild, with her one good leg fused to her body with the reshaped bone from the amputated leg.

Three years later, she is alive and kickin' -- snowmobiling and grocery shopping -- with her husband and two kids on their half acre in Balmoral.

"Where we live, we use ATVs and snowmobiles. I use my ATV to take my daughter to school... There really isn't a whole lot that stops me," she said.

Today, she's cancer-free, although she lives with the knowledge it could return at any time.

She uses a prosthetic pelvis and leg, wheelchair, crutches or walker, depending on what she's doing and where she's going.

"I have no problem getting around. If I need to, I'll crawl (up stairs) or scooch like a kid," she said.

"I don't want people to think 'we can't invite the Ollsons because they can't get in here with a wheelchair.' "

"I want to live life to its fullest." 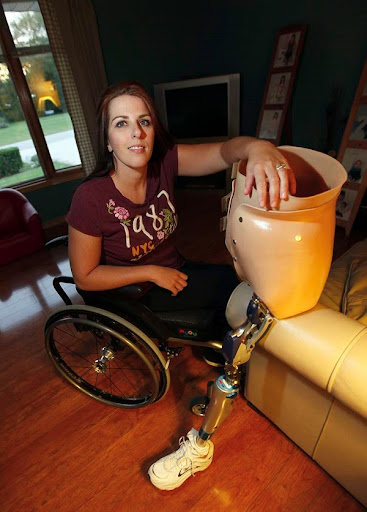 Ollson says she's never dwelled on "why me?"

"We don't know when it started... It's not known why anybody gets it. There's no cause for it, no genetic link," said the woman with no cancer in her immediate family.

"There's some purpose to all this whether I know it or not," she said.

Janis Ollson's first surgery to remove the cancer, her leg, part of her pelvis and lower spine took 20 hours, 12 specialists and 20 units of blood. She spent a week out of it and then had a second surgery to put her back together. That took eight hours and more than 240 staples. The surgeon put her back together, attaching the bone to her spine with pins and screws, close to her centre, almost like a pogo stick.

Since her groundbreaking surgery, three other patients have had it. Only one has survived, a young woman in Ohio. Ollson mentors her from afar and benefits from having someone to talk to who gets her daily reality.

"There was no one else like me until she came along... It makes me proud to be a survivor and doing so well I can help others."

There's much more at the link. Highly recommended reading.

Kinda makes our routine, mundane little problems of living seem trivial by comparison, doesn't it? Congratulations to Mrs. Ollson for her courage in the face of adversity, and helping others so generously when most of us, in her shoes, would be demanding help for ourselves!

I notice that you included an excerpt of the story in which Ollson ponders why she has suffered this apparently inexplicable calamity. I am pretty sure that you included it because you recalled the answer Jesus gave to his disciples when they asked him why the blind beggar had been afflicted from birth: " . . . [S]o that the works of God might be made visible through him."

And weren't they made visible here? From the creativity of the doctors, to the inspired skill of all the surgeons and support staff, to the growth of spiritual strength that enabled Ollson to reach out to another similarly suffering woman, don't we see God working through his humble creations to achieve something wonderful?

Thanks for sharing this story, Peter.