Today's winner is from England.

Every women wants a man to show her his chivalric side - but when this damsel was distressed by a spider, and her husband had a burning desire to save the day, there were explosive results. 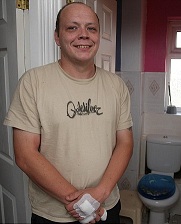 IT engineer Chris Welding, jumped into action after the arachnid frightened his wife Janine yesterday evening, and chased the spider into their bathroom in Clacton, Essex.

Wielding a flammable aerosol can, he sprayed the spider as it cowered behind the toilet pan - then lit a cigarette lighter to see if he had killed it.

However, the flame ignited the gas and caused a massive explosion which blew the man off his feet and lifted the loft door off its hinges, causing severe burns.

He suffered flash burns to his head, legs and torso and was rushed by ambulance to hospital after dousing himself in cold water.

[Firefighters reported:] 'We're not entirely sure whether the spider got away or not but there was no sign of it at the scene.'

*Sigh* . . . I thought everyone had learned, by the time they reached their mid- to late teens, that aerosols are highly flammable. Clearly, not all have experimented enough in their younger (and more foolish) days . . .

I believe he later admitted to using the can as a blowtorch. Doofus indeed.

A poor 14 year old kid here recently was burned over 90% of his body, and died. He was using
gasoline to light the family bbq grill. Apparently there's much more learning to do.

"I thought everyone had learned, by the time they reached their mid- to late teens, that aerosols are highly flammable."


Depends on how you were using the aerosols - if you were inhaling them there probably wasn't a lot of learning going on.