I thought I'd heard most of the weird ideas out there about clothes, but this one's new to me. The Daily Mail reports:

Thanks to a liquid mixture made of cotton fibres, we could soon be spraying ourselves into everything from T-shirts, dresses and trousers to swimwear and hats.

Fabrican - literally fabric in an aerosol can - is the brainchild of Spanish designer Dr Manel Torres who has spent ten years working on his invention.

Drying as soon as it hits his skin, the garment can be taken off, washed and re-worn. 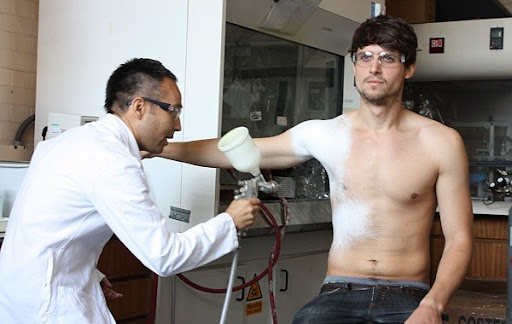 Dr Torres teamed up with Paul Luckham, Professor of Particle Technology at Imperial College London, to create Fabrican, which consists of cotton fibres, polymers (the plastics which hold them together) and solvents which keep it in liquid form.

When you get bored with your creation it can be dissolved and the material used again to make something new or repair old designs.

Dr Torres has also suggested other areas where his flexible adhesive invention could be used:

There's more at the link. Here's a video clip showing how it works.

I don't see much point to this stuff for ordinary everyday use - not when clothing's so cheap and freely available. However, one area where I think it might be very useful indeed is if it can be supplied in large tanks, for use in disaster recovery. One of the most difficult aspects of such missions is finding clean clothing for everyone, particularly when the clothes they're wearing are filthy with mud or dust, or caked in blood, or have to be cut off their bodies to allow medical treatment. A tool like this could mean that everyone could be given a temporary 'spray-on' coverall of some kind, fitting them perfectly, and allowing for the disposal of their old, dirty and unhygienic clothes. For areas requiring loose-fitting clothing (for the sake of modesty), the same equipment could produce lengths of material to be draped over those needing covering, and quickly pinned or stapled or sewn in place. They could even be used to make tents and shelters.

Sure, it'd only be a short-term measure, but it'd still be better than nothing - and the tanks of 'liquid fabric' and the relevant nozzles and pumps could be ferried aboard relief ships or aircraft or vehicles, without having to worry about providing a huge supply of clothing in various sizes. When more conventional clothing became available, the 'instant' variety could be recycled into fresh liquid, for use at the next disaster site. Sounds like a winner to me.

Emergency pants... in a can!

"Why emergency pants, Torg?"
"I don't know, but in every scenario I can come up with, I'm glad I have them!"

HAH! Sluggy Freelance...I actually got a reference for once!

meh, just pack a couple hundred bolts of cloth and some needles and thread in the relief ships. That way you don't have to transport chemicals.

I can think of some young ladies I'd like to see this demonstrated on.

I can think of some great applications for this, but I can't mention any of them in a family forum...

Reminds me of the cocoons in Babylon-V-- if you have that stuff sprayed over you, do you come out as a Minbari?