So much for flight safety!


The Indian Air Force has a problem. Its HAL HPT-32 Deepak primary training aircraft keeps crashing - to the (frequently fatal) detriment of its instructors and student pilots. 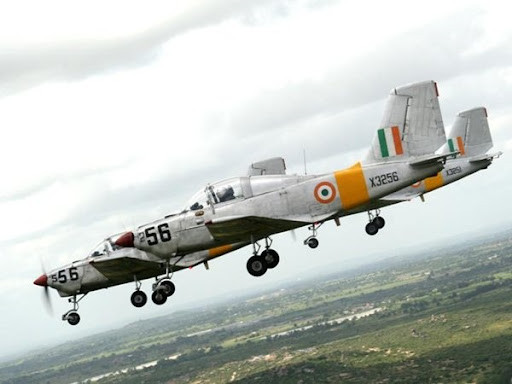 The problems have been identified - the engine often cuts out in inverted flight, and the aircraft has all the gliding characteristics of a well-made brick. Since inverted flight, and recovery therefrom, are integral elements in military pilot training, this tends to produce a less than enthusiastic response in those ordered to fly the thing, particularly since they can't rely on gliding down to the ground after the inevitable happens. As Ares points out:

When the HPT-32's Lycoming piston engine cuts out (because of a known flaw in HAL's design), the aircraft's glide ratio is so poor a crash is almost inevitable. There have been more than 90 incidents of power loss since the Deepak entered service in 1984, says The Hindu, and 19 fatalities in 17 crashes, says the Business Standard.

You'd think that with a record like that, the authorities would ground the plane and replace it. Er . . . not so much. They've launched a competition to replace it, all right, but in the meantime they want to continue using the HPT-32 to train their students. (Whether or not the students are happy with that idea is, of course, open to question.) The Indian Air Force has come up with an idea. Ballistic Recovery Systems of Minnesota has been contracted to supply and fit whole-aircraft parachutes to the HPT-32 fleet. The idea is that if the engine cuts out, the instructor or student can push a button to deploy a parachute, beneath which the aircraft and its occupants will float safely to earth. (One such deployment, on an aerobatic aircraft in Argentina, was shown a few days ago on this blog.)

I can't help but wonder how good an idea this is (or isn't). Sure, the parachute may save the occupants of the plane from fatalities, but there have been some nasty injuries when aircraft have dropped onto uneven terrain and tumbled down a hillside. You may be strapped inside, but that won't necessarily protect you if a honking great rock comes through the windscreen! Also, the authorities seem to be saying that they expect the aircraft to fail - and they also expect their students to suck up that reality and ignore it. Personally, if I were told to fly a plane that I knew had a better than fair chance of dying on me . . . I'd rather not fly it at all! Surely, given an aircraft that's a known flight risk, it would be better to ground the damn thing once and for all?

*Sigh* . . . I guess I'm not ruthless enough to be a senior officer in the Indian Air Force!

Well, it DOES tend to weed out the faint of heart doncha know... :-)

I don't, think it is a ruthlessness. It is more of an acceptance of risk, that most Americans would blanche at. Being married to an Indian and getting to know the Indian cultures - from a near insider perspective - Indians take what I would consider insane risks, just getting to work everyday. The parachute will probably encourage them to practice inverted flight more often.

The USAF had a similar problem with the T-3A Firefly. They grounded and eventually scrapped the whole fleet.

Hey, lookee...it's made by a state-owned company. Just like India's own assault rifles, which have been reported to be, to put it mildly, nothing but crap. I do wonder if this aircraft manufacturer suffers from the same reported problems as the gun factories.