I think I've heard everything now! A German Web site is selling a range of stuffed toys, each with an alleged psychiatric problem. Metro UK reports:

The toys range from Dub, a turtle who suffers depression, to Kroko, a crocodile with an acute phobia of water, as well as an hallucinating snake called Sly and a sheep called Dolly who has a personality disorder. 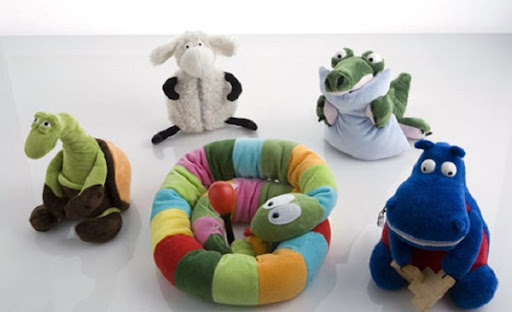 The toys are made by 36-year-old Martin Kittsteiner, of Hamburg, who says: 'It started as a bit of a joke with my girlfriend, who has lots of soft toys, and then we thought there could be something in the idea.'

He added: 'Children and grown ups like their vulnerability and find something in them that gives them a great sense of comfort in helping to heal them.'

'I think some adults see it as a form of therapy for themselves.'

The cuddly toys are sold from the parapluesch.de website - styling itself the Psychiatric Institute for Abused Cuddly Toys - where customers can also play an online game as a doctor trying to diagnose the toys' problems.

For the life of me, I can't think of a single healthy thing about this range of toys! Don't kids have enough problems, growing up in our modern world, without adding stuffed psychiatric basket-cases to their load? Whatever happened to the good old-fashioned security blanket?

I don't think they are meant for kids. Rather, like the germ stuffed toys, they're for adults with too much money to put on their desks.

Agreed with ShortWoman. Also, I've played that game, and it's actually quite a lot of fun- and the overarching theme does tend to be subverted innocence. I'd say it's not really a game for kids, but when I think back to some of the stories that ARE for kids... well, Hansel and Gretel is about parental abandonment and cannibalism... I dunno, I probably would have enjoyed it when I was young, but then I was always a few degrees off plumb.

Hell, I think I'll go back over there and see if any new content is available for play.

Also, I think if you were a kid with one of these problems, it might be reassuring to have a toy that has a similar issue.

These could have significant value in child therapy.

These don't evoke the same response as the Vermont Teddy Bear "Crazy for You" bear did in 2005. Which enraged the mental health industry and an executive resigned over it.