The reality behind the US budget


President Obama made an astonishing admission this week. He stated something we've known for a long time, but never heard admitted by any leading politician. Replying to a question about the budget, he said this:

The one thing I have to say to the public is that about 60 percent of our budget is entitlements, Social Security, Medicare and Medicaid. And a lot of the discretion I have is somewhat limited on these programs.

Now part of the reason health-care reform was so important is because the biggest driver of our long term budget deficits is Medicare. If our economy is growing at 2 or 3 or 4 percent, but health care costs are going up 6, or 7 or 8 percent, than the budget will blow up no matter how many cuts I make in other programs...

There's more at the link, but the important bits are in the quote above.

The indispensable Karl Denninger jumped on that statement with both feet - and rightly so.

... notice how he sidesteps this and tries to turn it into a growth problem? It's not. 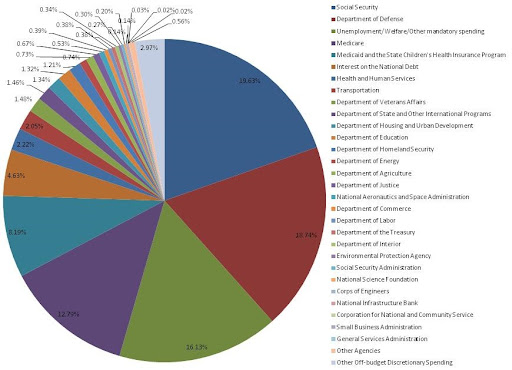 Entitlements consume, for all intents and purposes, every dollar of tax receipts in the here and now. Not tomorrow, not as growth in medical spending occurs, not in the future.

Note that we haven't spent one nickel on defense yet. Nor have we paid the interest on the debt, which is quite mandatory. Nor have we funded one of our so-called "discretionary" programs, including Homeland Security, Energy, Education, HUD, Department of State, Veterans Affairs, Justice or anything else.

What President Obama told you is that The Federal Government has no plan to deal with this, not now and not in the future. It cannot even meet its own entitlement spending from the taxes it collects, leaving the entirety of the rest of the government, including national defense, to be put on the credit card.

You were told, today, that our government is insolvent.

Not "might become" insolvent if we don't change our ways.

The United States is insolvent, right here, right now, today, and The President announced it for all who cared to listen worldwide on national television.

President Obama says "we can't afford" that $700 billion. But that number is over 10 years, as are all numbers proffered by the CBO and other agencies when talking about the budget and debt. Those numbers are thrown around because they make you think they're big now, which is especially important when a politician wants to lie to you about what they can and will do about deficits tomorrow.

That is, this big fat "$700 billion" amounts to roughly 5% of the deficit, and that is what we would "collect" if taxes go up and people do not shift behavior as a consequence (but they probably will.)

The "Bush Tax Cuts" are absolutely irrelevant to this discussion. The problem is not found in taxes and cannot be solved via tax policy. President Bush, via signing Medicare Part D, dramatically exacerbated this problem, but he was hardly the one who started it. For that you need to look back to FDR and Eisenhower, along with all the others since including The Right's "standard bearer" Ronald Reagan.

It is mathematically impossible to solve this problem without dramatically cutting back on entitlement spending - by something approximating one third to one half.

That isn't going to happen (voluntarily) either.

So as an investor you are reduced to one - and only one - question:

How long will the "bubble view" of both Treasuries and Equites hold up - that is, for how long will people buy both stocks (at ridiculous bubble-spending levels where the government is providing 12% of GDP's gross amount via deficit borrowing) and bonds (funding said 12% of GDP) before those very same people have sink into their skulls The Admission The President of The United States just made on National Television: WE DO NOT HAVE THE ABILITY TO FUND THE GOVERNMENT TODAY AND STRUCTURALLY NEVER WILL, BECAUSE HE DOES NOT HAVE THE DISCRETION TO DECREASE SPENDING IN THE PROGRAMS THAT CONSUME ALL OF PRESENT TAX REVENUES.

That's it folks. That's the only question to ask as a long-term investor.

For how long does the mass-delusion last?

Nothing else matters, because when (not if) that delusion ends the valuations of both stocks and bonds are going to collapse.

Again, more at the link. Emphasis in bold and italic print is Mr. Denninger's.

Friends, I know some of you regard me as a Jonah or Cassandra on our economy, but Karl Denninger is telling us the exact and literal truth. So, for once (and probably without meaning to), is President Obama.

Plan accordingly how? Buried money jars in the back yard? Seems like there should be a better option, but I sure can't come up with it myself. I really would love to hear your take on this.

Hydrogeek, to coin a phrase, 'put not your trust in princes'. The only thing we can do as individuals and families is to batten down our personal financial hatches: pay down debt, build up savings, and prepare for a prolonged period of economic difficulties.

I'm not a full-blown survivalist fanatic by any means, but I think such preparations should include keeping at least a month's supply of food and essentials on hand at all times, to cope with temporary disruptions in supply, and also to prepare yourself for what may happen if essential services (particularly police and other security agencies) are cut back. This is already happening in some parts of the country, where local government can't afford to pay for adequate patrols, urban lighting in dangerous areas, etc. The result is increased crime. It's a good idea to be prepared to take care of any such crime that may affect you and yours.

I hope there will be more comments in response to hydrogeeks excellent question. At what point would people take the 30% hit on IRA and 401k savings? If you do, what do you put those savings into that might help to support you in retirement in the kind of future imagined here? (Hint: at 48yo canned goods won't make it to when I retire, though that issue could be limited if insulin supply is problematic). What concrete steps would you take if you believed the facts as presented?

As a late bloomer, I don't have much in retirement, took a long time to get out of college, and raise the family.

I have invested in skills, blacksmithing, gunsmithing, electronics, canning, reloading.
I study small unit tactics, and as much historical info as possible. I want to be prepared for the return to "agrarian" society. Will it happen? I don't know.

I don't have a lot of disposable cash, so hoards of gold and silver are beyond my means. I only owe on the house, and I have most of what I need to revert to electricless living. I'm looking for land, but I'd like it close to town. I believe small towns are gonna be the safest bet. I wish I were a 100 miles or more from major metro areas, but I'm not.

I hope we pull out of the dive, but the ground seems awfully close, and even a glancing blow may be more than we can bear as a nation. I am training to trust in God, not the arm of flesh. I do good some days, others, not so well.

Exciting times to be alive, eh?