Today's winner is from Hertfordshire, England. He appears to be an enthusiastic amateur archaeologist . . . with more enthusiasm than sense when it comes to explosives! I've highlighted relevant bits in bold print.

Most people get excited if they dig up a trinket in their back garden but David Murray was left ‘shocked’ when he unearthed the remains of a prisoner of war camp.

The 39-year-old’s interest was stirred when he found a German soldier’s World War II ID tag as he was digging behind his bungalow.

An hour later he had located bottles, uniform buttons and ammunition from the Hertfordshire camp which once housed 10,000 German PoWs. 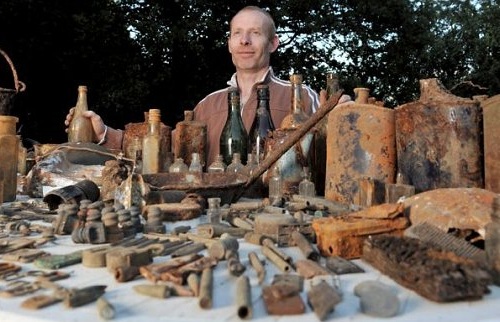 Weeks on he has now recovered 2,000 items – including a live grenade he tried to defuse himself.

‘It was a huge shock when I found the tag,’ said Mr Murray. ‘It was just poking out of the ground so it was just luck I saw it glint in the light.

‘I didn’t realise what the grenade was – it didn’t look like the ones you see in the films. I tried to defuse it a couple of times myself but I couldn’t get the screws off the top. ‘It’s a good job because the RAF said it was very unstable. They weren’t very happy with me when I told them I’d been holding it next to my ear and listening to see if it would go bang.'

As my buddy Lawdog would say, sweet suffering Shiva!!! This dumbass is digging up known militaria . . . he finds something he doesn't recognize . . . so he holds it to his ear and listens to see if it'll go bang!!!

Let's not be too hard on the poor dumb bast... ...guy. He is from the place Great Britain used to be, and they have been effectively disarmed for quite some time. As he admits, "I didn’t realise what the grenade was – it didn’t look like the ones you see in the films."

His education of firearms and military gear likely begins and ends at the cinema, so he knows not what he trifles with.

Hey Chief! I missed a Darwin Award by, that much!

I'm happy for him that he wasn't arrested for possessing the grenade -- I seem to remember a couple stories where English citizens were sent to prison for smaller offenses.