Save the sporran, och aye!


Trust the Scots - and the Eskimos - to find a way to confound the bureaucrats!

Kiltmakers are turning to Eskimos to beat a Brussels threat to sporrans. 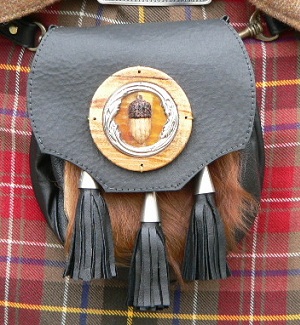 The EU last month banned products made from sealskin - the traditional source of leather for the Highland kit.

But kilt firms found a legal loophole that could allow them to use hides supplied by the Arctic's Yupik and Inuit people.

They are exempted from the import ban because seal-hunting is part of their culture.

Ian Chisholm of the Scottish Kiltmakers' Association said: ‘We may be able to use skins if they have been hunted as part of traditional culture.’

He said if the deal is approved it will be a ‘lifesaver’ for the industry.

Sporrans have been made from sealskin since the 18th century.

They typically cost around £145, although more ornate examples can sell for up to £2,000.

Mr Chisholm, who also runs the Inverness-based company Chisholm Highland Dress, said: ‘Nothing beats sealskin. It has a quality of its own. It has a beautiful lustre against the tartans of the kilts.

‘You can dye the other skins but you can still tell the difference. They do not have the same texture and are not as soft to feel.’

The sporran-makers' move would be a welcome boost for the Eskimos, the indigenous people of the Arctic.

A spokesman for the Eskimo tribes in Canada said they were keen to supply the Highland dress industry with seal skin and that sales would help pay for gas, food and snowmobiles.

He added: ‘Our communities have a lot in common and we feel a connection with the people of Scotland who also rely on traditional trades.’

Hmm . . . I wonder how many sealskins from waaaaaay beyond the Arctic Ocean are suddenly going to appear in Northern Canada, with a "Proudly Caught By Eskimos" label on them?

Labels: Boys and their toys, Bureaucracy, Business and Commerce, Funny, Political Correctness
Email ThisBlogThis!Share to TwitterShare to FacebookShare to Pinterest

Dunno, but if it helps the Eskimos get a little income, it's all good...

There are a number of robustly healthy seal populations out there. That their hunting is banned is pretty much solely because they are cute.

I have a jaundiced eye regarding hunting of legitimately threatened species being permitted because it's somehow "cultural"- see bowhead and grey whales- but I think the Inuit have the right end on this one...

They call themselves Inuit if you're so inclined, Eskimo being a little archaic.

As for seals, if they didn't live on the ice like that their being culled wouldn't be so dramatic, I think.

I don't think there will be too many from outside the arctic since the Inuit have a surplus of skins and no market.
LabRat, the population of gray whales in the Eastern Pacific is near or at historic population levels. That of the Western Pacific is low. Bowheads are in trouble.