I'm sure many readers remember the Douglas DC-6, which was one of the dominant airliners of the 1950's before the advent of jet-powered aircraft like the Boeing 707 and Douglas DC-8. After the jets took over the major routes in the 1960's, the older piston-powered airliners continued to service secondary routes, and provided charter and cargo flights through second- and third-string operators. A large number of them ended up in more isolated parts of the world such as Africa, South America and South-East Asia, where the pressures of the Vietnam War kept many in service.

One such aircraft was DC-6 serial number 45329, delivered brand-new from the Douglas factory in California to Canadian Pacific Air Lines on August 15th, 1957. It served with that airline until 1961, when it was sold to Transair of Sweden. From there it found its way through several owners, including Braathens of Norway, Greenlandair and Air Atlantique. In 1980 it headed for southern Africa, joining Air Swaziland. 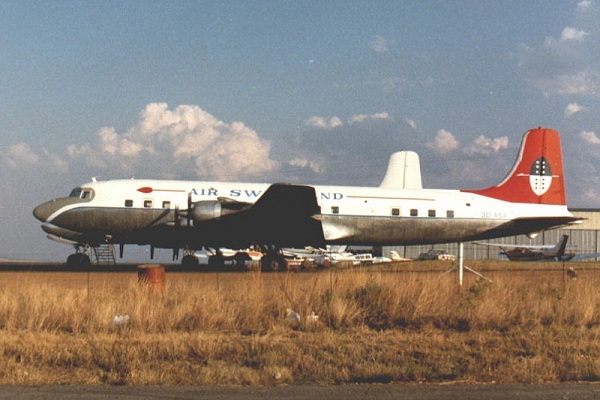 I can remember flying aboard her in Air Swaziland livery. She wasn't in the best of condition even then, showing the wear and tear of too many low-budget operations that hadn't maintained her properly. The aircraft spent the next several years hopping around the African continent in various liveries (details of her operational history, along with many pictures, may be found here). Finally, she was donated to the South African Airways Museum Society, which flew her to the Swartkop airfield of the South African Air Force and parked her there, awaiting restoration - something for which funds, expertise and time just never seemed to be available.

Here she was discovered several years later by two aviation enthusiasts, Witold Walus and Willie Muntingh. They bought the dilapidated old aircraft, and decided to move her to their private airstrip north of Pretoria, South Africa. They were advised to cut off her wings and move her by road, but to their everlasting credit among fellow aviation buffs, they decided to invest two years of their time and a great deal of money and effort in restoring her to airworthy condition, so she could make the final flight under her own steam. A fascinating account of the restoration project, complete with many photographs, may be found here.

The final landing promised to be 'interesting' . . . the (dirt) airstrip at the plane's destination was a mere 500 meters (1,640 feet) long, whereas the DC-6 normally required a minimum of 3,000 feet to land safely - and that was on tarmac, when lightly loaded! Clearly, something would have to be done. At considerable expense, and with the co-operation of neighbors, an extension of some 800 meters (2,625 feet) was carved out of the veld, albeit at a slight angle to the original strip, and the whole strip widened and smoothed. 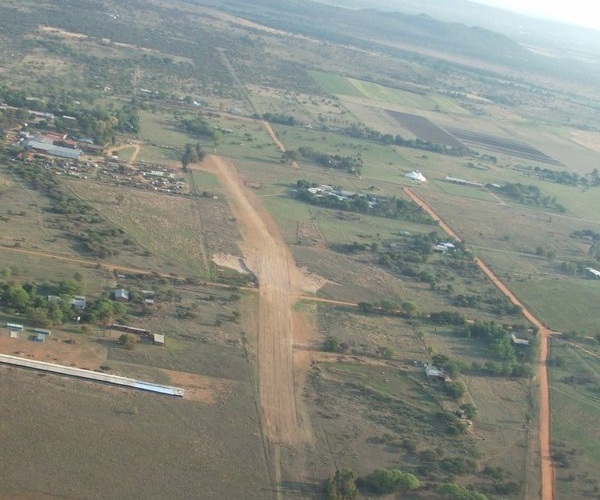 The total length was now about 4,265 feet, although being a relatively loose, sandy surface, it wouldn't give the same traction to the wheels and brakes as would tarmac or concrete. Nevertheless, two highly experienced pilots from South African Airways, Johan van den Berg and Laurie Raath, along with flight engineer Mike Mayers, agreed to take the aircraft on her final flight from Swartkop to her new home.

They took off from Swartkop early in the morning of December 4th, 2010. Arriving at the airstrip, they flew two low passes to check the conditions, and to show the aircraft 'up close and personal' to a group of excited aviation enthusiasts who'd gathered for the occasion, allowing them to photograph and film the plane. The final approach was a nail-biting affair as they touched down right at the very edge of the extended part of the airstrip, the main landing gear almost in the bush! The video clip below shows how it went. I recommend watching it in full-screen mode.

A great piece of flying! A shorter version of that video, showing only the landing itself, may be found here. There's also a very interesting thread on a South African aviation forum, discussing preparations for the flight and containing much more information and photographs, like this one. 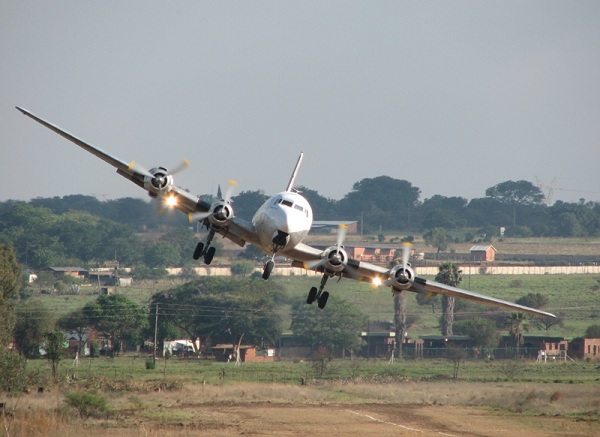 It's sad to think that the aircraft will never leave that particular patch of African bush . . . but she'll bring pleasure to her owners as a piece of aviation history in their private museum. Perhaps she'll inspire some of the local children to dream of flying a plane of their own, one day.

When my father worked for Pan Am in the 1950's we use to fly "ferry flights" from New York's Idewild (JFK) airport to Miami International where Pan Am had an engine overhaul facility. The piston engines in those days needed to be torn down every so many miles and rebuilt.

The DC-6 was one of the many aircraft we flew. I remember we generally flew at 18,000 ft. and on more than one occassion with one engine "out" and the others sending burning carbon out like sparklers.

The "6" was a great aircraft, but my favorite was the Boeing "Stratocruiser (B-377). It had two decks, designed to fly long range and was developed from the C-97 Stratofreighter after WW-II. Too bad the Jets came along and put it out of business.

Magnificient!.
To those two gentlemen and all who got her back in the air, your deeds will be 'ever remembered', I shall show this to my Grandchildren, and I tell them, "Grandpa used to see aeroplanes like this when I was your age", aeroplanes like this DC-6, are REAL aeroplanes!.
Here in Australia, there is a Lockheed Constellation that can be heard and seen by those lucky enough to be at the right air display at the right time, it is truly a beautiful sight, and sound.
Again, many, many thanks for this video, it is just so special to see and hear this aeroplane, - the flying/landing is impressively professional!.
A rare demonstration of all that is the best of flying, that now only the very lucky few are fortunate to see.
Well done!.
Stuart Garfath, Sydney, Australia.

It has been my dream to find a DC-2 or -3 and set up a business taking slow trips across Texas. A throw back to the 30's. They do old train rides here, so why not an old aircraft? Most of these older beauties wind up as hangar queens or worse.

I had tears in my eyes seeing that sweet old bird having the honour of self-powered flight.

I had the privilege of seeing and hearing a DC-7 climbing out of IAD.
There is nothing like four radial engines under full load to make you wish you were 20 years old, wearing a leather jacket and silk scarf.

very nice! Sort of the heavy metal version of putting a Helio Courier on a gravel bar!