That's a heck of a way to fill your tank!


I've got to hand it to the residents of the frozen North, and to the ship crews who keep them supplied with essentials during the cold, dark months of winter, through all sorts of hazards. The hazards confronting them have been graphically illustrated by the journey of a Russian tanker.

The Seattle-based Healy – the only polar ice breaker in the U.S. fleet — assisted Renda on its mission to deliver more than 1.3 million gallons of fuel to Nome, Alaska, after a winter storm restricted a scheduled delivery by barge. 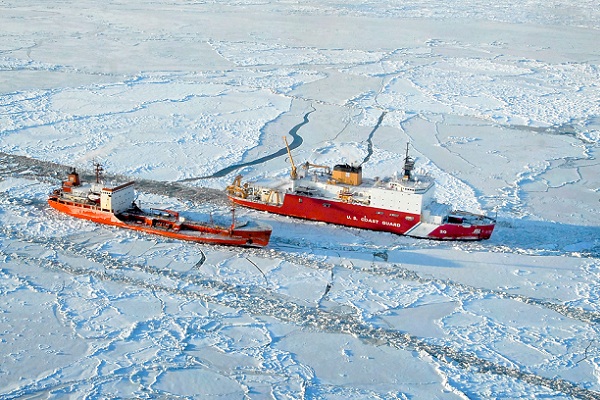 The storm prevented November’s scheduled delivery, leaving Nome’s 3,500 residents without enough gasoline and diesel fuel before the next scheduled delivery in late May or June. The 370-foot tanker set out from Russia in mid-December. It stopped in South Korea to pick up diesel fuel and then called at Dutch Harbor, Alaska to load up unleaded gasoline. Renda left the Alaskan port — accompanied by Healy — on Jan. 3.

The 420-foot Healy — yes, the ice breaker is bigger than an oil tanker — is designed to break 4 ½ feet of ice continuously at three knots and can operate in temperatures as low as 50 degrees below zero (Fahrenheit). Unlike most ocean-going vessels, the Healy has a blunt, rounded bow that enable it to ride up on top of the ice. As the bow goes up and the stern (rear) sinks below the water, the force of buoyancy acting on the submerged part of the stern create a lever-like action bringing Healy’s 16,000 tons down onto the ice — breaking it, according to Lt. Commander Kristen Serumgard of the Coast Guard’s Office of Cutter Forces.

After a 5,000-mile journey, the Renda made it — almost — into port at Nome on Jan. 14. Because of the tremendous amount of ice that was as hard as concrete, the Renda pumped out its cargo through hoses that stretched over 500 yards to the distribution facility.

There's more at the link. Here's a video clip of the ships' journey through the ice.

It's a bit more complicated than simply filling one's vehicle's tank at the corner gas station, isn't it? We take far too much for granted in our comfortable urbanized lifestyles . . .