This blog is ON STRIKE to protest SOPA and PIPA 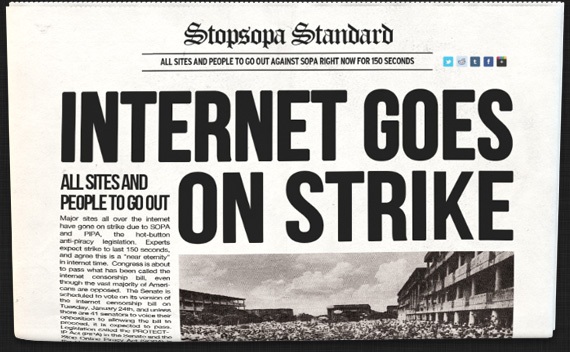 This widespread "strike action" is to protest the proposed Stop Online Piracy Act (SOPA) in Congress, and the Protect IP Act (PIPA) in the Senate. Here's why.

You can read more about the problem here.

Even though SOPA has been shelved (temporarily) in Congress, its leading sponsor, Rep. Lamar Smith (R-Texas) insists that "markup of the Stop Online Piracy Act is expected to resume in February". He appears to be deliberately ignoring the roar of protest that SOPA has generated across the entire Internet, and is obviously not interested in our opinion - only what his "campaign contributors" want. As for PIPA, as at the time of writing, it's scheduled for a cloture vote in the Senate on January 24th, 2012. Again, its Senatorial sponsors don't appear to give two hoots whether or not their constituents approve of it, or want it.

Some of the biggest names on the Internet are joining in this protest, including Reddit (which initiated this "strike action" and deserves our grateful thanks for its leadership in this matter), Google, Wikipedia and many others. We all hope that it will motivate you, our readers and users, to contact your Congressional representative and Senators, and make known to them your opposition to SOPA and PIPA. Only by working together can we defeat this massive assault on our Constitutional rights and freedoms, and preserve the independence of the Internet for all to enjoy.