An interesting mixture of First and Third Worlds


Readers may recall an article I posted about the rise of the bicycle as a means of general transport in Japan after the earthquake last year. Discussing the use of bicycles around the world, I included this composite picture of Third World applications of bikes as cargo carrying devices. 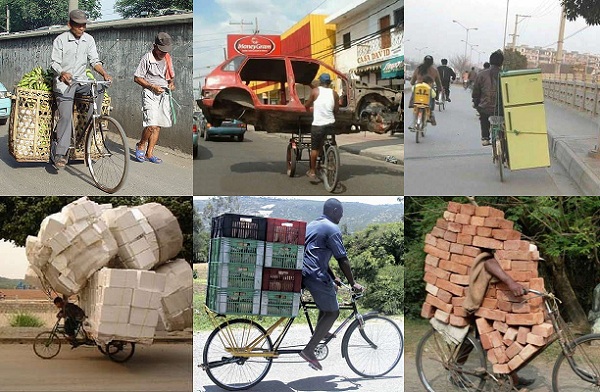 It looks like China's runaway sprint towards a First World economy is producing a similar imperative there, even in Beijing. The Daily Mail reports:

This pair of Chinese 'human snails' look like they've snapped up some cracking bargains during the January sales.

Loaded sky high with office chairs and furniture they laugh and joke, to the visible gasps of onlookers, as they weave their heavy load around the streets of Beijing. 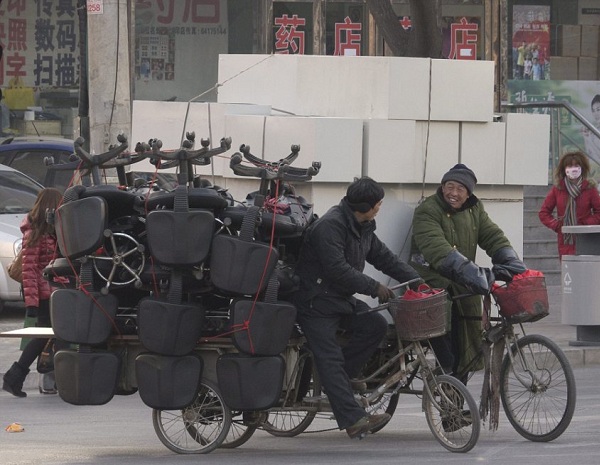 But three-wheeling is not the preferred mode of transport for the delivery drivers who are actually forced to take to their tricycles during the day.

Beijing's banning of motorised delivery during daylight hours is just one of a series of measures introduced in 2008 and designed to cut down congestion in the Chinese capital.

Drivers of the city's five million cars are banned from taking to the road one day per week, depending on the final digit of their license plate, and only 20,000 licenses are issued each month.

There's more at the link - and here's why Chinese authorities are so draconian in trying to cut down on the number of vehicles on their streets.

Even in my most crowded commutes, I don't think I ever spent more than an hour on the road between home and work! I'm glad I don't live in that sort of severely congested environment . . .

I lived in Beijing in 2006. I ALWAYS took the subway, even though I could afford taxis, because it was so much faster.

My father worked there in the 90s, and he has stories of being in the only car in sight on the streets around Tian An Men.

China is an amazing place.