A few years ago I wrote about clothing woven from the silk of the Madagascan golden spider. At the time, it wasn't clear to me whether the cloth had been made into a tapestry or a shawl. Now a new report from England helps to clear up the uncertainty.

With its dazzling colour and intricate embroidery, this golden cape is a work of art.

But look a little closer and, sewn into the cloth itself, you’ll see its rather spine-tingling secret – it is made from spider silk. In fact, the silk of more than a million spiders. 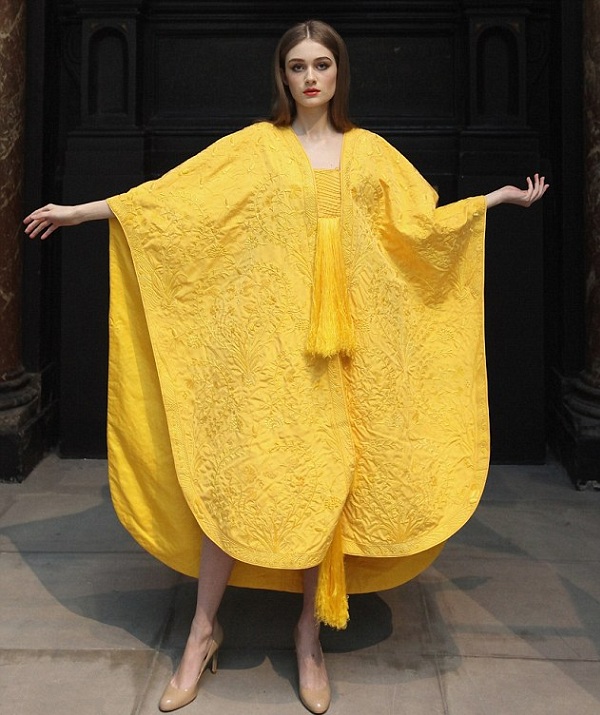 The precious garment was painstakingly woven over four years with silk collected from female Golden Orb Weaver spiders, found in the mountains of Madagascar.

Adorned with images of the two-inch spider, the garment is the only one of its kind in the world, and will go on display tomorrow at the Victoria and Albert Museum in London.

The cape takes its colour from the silk itself, which is naturally golden. It was created by Englishman Simon Peers using a process revived from more than a century ago.

Each day workers collected thousands of Golden Orbs. Their silk was extracted using a hand-powered machine which allowed handlers to pull strands from each creature’s multiple spinnerets, before they were released back into the wild.

He boiled cocoons, extracting the threads with combs to make socks, gloves and supposedly a full suit of clothes for King Louis XIV.

The last known spider silk textile was created at the end of the 19th century for the Paris Exposition Universelle in 1900 but no examples remain.

The new piece has been created in the form of a cape, decorated with intricate embroidery and appliquéd motifs.

There's more at the link, including more photographs. I'm glad to finally see the entire article, rather than the close-up photographs of only part of it which is all I'd been able to find for my earlier article. Lovely, isn't it? - but if I were wearing spider silk, I'd worry that every passing arachnid might want to get better acquainted with me!

That's pretty awesome, the clothes should be quite durable as well, after all spider silk has higher tensile strength than steel.

My missionary friend once told me that silk is the warmest material for clothing in Asia. It is why she always wore real silk underwear instead of thermals. (The Central Valley of CA gets VERY cold during the winter months.)