I'm sure there's a wake going on at the headquarters of Britain's Special Air Service Regiment in Hereford tonight. The last surviving 'founding member' of the SAS in World War II died earlier this month. The Telegraph reports: 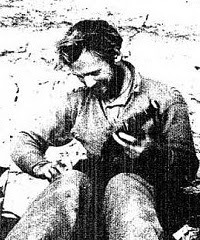 Jimmy Storie [shown in 1941, at left], who has died aged 92, was the last surviving member of “The Originals”, the handful of men who first joined “L” Detachment, the unit that under the leadership of David Stirling developed into the Special Air Service Regiment.

The force’s mission was to operate many miles behind enemy lines, attack airfields and convoys, blow up planes, destroy fuel dumps and derail trains. Based at Kabrit, near the Nile, they lacked even the most basic supplies and Storie took part in an unofficial raid on another camp in which tents, stores and rations were appropriated (together with a piano and easy chairs from an officers’ cinema).

There were, however, failures of equipment and on one occasion two men jumped to their deaths during parachute training. Storie said that he did not sleep much that night.

In November 1941, Storie took part in a raid on two German airfields at Gazala and Tmimi, Libya. The men parachuted into a sandstorm. As Storie said afterwards, one man who broke his back had to be left with a bottle of water and a revolver. There was no possibility of saving him.

Barely a third of the original strength returned to base; the rest were killed or captured. In attacks thereafter, L Detachment drove to its targets in Jeeps. Storie took part in numerous raids with David Stirling and Paddy Mayne, officers whose exploits became almost legendary. In one period of two weeks, 100 enemy aircraft were destroyed.

In one raid, they dodged sentries and crept on to an airfield, placing bombs with delayed-action fuses on the fighter aircraft lined up on each side. Then they got into the hangars, which were full of Junkers, and set more charges. The door of the guardroom was bashed open and grenades thrown in.

As they made their escape, there was a series of deafening explosions, flames were licking through the high roofs of the hangars, the planes on field were alight and their cannon shells were exploding with the heat.

To counter such raids, the Germans started to deploy guards beyond base perimeters. But Stirling and his men simply switched tactics. In July 1942, in a raid on the airfield at Sidi Haneish, L Detachment took part in one of its most spectacular missions.

“The planes were all parked up on either side of the field,” Storie said afterwards. “We drove our Jeeps in a line and went in with guns blazing. Each of us singled out an aircraft, brewed it up and then we swung around and went down the other side.” These raids proved Stirling’s theory that a few highly trained men deployed in unconventional style could do more damage than a whole regiment using more conventional methods. 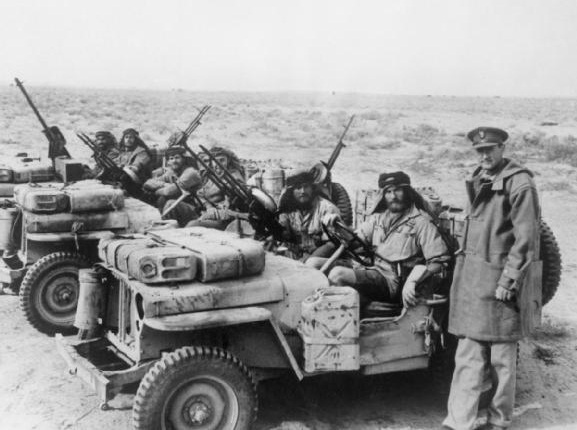 The hazards, however, did not all come from the enemy. Lying up before a raid on Berka airfield, Storie found himself infested with fleas and could hardly close his eyes. Then, as night fell and they finally reached the airfield, an air raid siren sounded. He threw himself to the ground as the whole area was lit up by flashes from AA guns and shrapnel from RAF bombs crashed around him.

Storie had many close shaves. One evening, after dark on the Benghazi plain, his group, seven in number, ran into a fully manned enemy roadblock. A German NCO, swinging a red lantern, stepped out into the road. His demand for a password was met with a string of swear words from the German-speaking member of the SAS unit. They had been at the front for six weeks, the man was told, they were hungry, in need of a bath and in no mood for formalities. The SAS were all in uniform. A mile away, the fires were still smouldering from their raid the night before on an airfield, which had killed many Germans. The stakes could hardly have been higher.

Mayne cocked his revolver. Storie followed suit. The German sentry heard the clicks in the stillness. He knew the men were British but he also knew that if he gave the alarm he was a dead man. He let them through.

On another occasion, Storie was returning to his lines when his Jeep was shot up by a Stuka dive bomber. Two of his comrades were killed and he and one other SAS man were stranded in the desert. They walked back to camp but found it abandoned.

Setting off again they aimed for the coastal road but after several days dodging the enemy patrols they were captured. Storie was flown to Germany.

At an interrogation camp in Munich, he feared that he would be executed because Hitler had decreed that no quarter should be given to special forces engaged in sabotage.

He managed, however, to convince his captors that he was an RAF crewman who had been shot down and was sent to Stalag VIIIB in Silesia. He was liberated by the Americans in 1945.

The SAS was one of several special forces units that had their genesis in the Middle East during World War II (others included the Special Boat Service, Popski's Private Army, and the Long Range Desert Group, all of which had contact with and/or worked with the SAS from time to time). In the vernacular idiom, the men who founded, manned and led those units may truly be said to have had 'great big brass ones that clanked when they walked'. They set the tone for almost all special operations forces since that time. (I had the great privilege of getting to know several of the members of 'C' Squadron SAS, better known today as the Rhodesian Special Air Service, during the late 1970's and early 1980's. They were men of the same ilk, and I daresay Mr. Storie and his peers would have recognized them as kindred spirits.)

There are very few men of the caliber of special forces troops in this world. We are the poorer for the passing of any of them, and in particular for one of the 'founding fathers' of their breed such as Jimmie Storie. May his sins be forgiven him, and may he be reunited with his comrades in courage in the hereafter.

If you can find a copy read "Warriors
on Wheels" by Park Yunnie a fantastic funny read.