A sobering lesson in Big Government


Via a link at Rev. Paul's place, I came across an excellent (if chilling) article at Down Range Report. Here's an excerpt.

We should know by now the government controls everything in our lives from the time we come screaming into this world and get a govt. issued birth certificate till the time we die and our next of kin gets a govt. issued death certificate. The hospital you are born in has more govt. regulations and licenses than you could possibly dream of. When you leave the hospital as a baby you now have to ride home in a govt. approved car seat, in a car the govt. approved and licensed and driven by a govt. licensed driver.

The article was made doubly chilling by a couple of articles I came across today concerning the attitude towards its citizens of the Chinese government. It seems that, if the State decides there are enough vehicles on the roads, it simply stops issuing new licenses, or at least severely restricts the number it issues. If you happen to buy a car, and want to license it so that you can drive it . . . tough. You now own an 'illegal vehicle' - and this is what the State does to it.

Today’s Daily Sunshine reported that 14,277 confiscated “illegal motorcycles” were destroyed by bulldozers in Yungang district, Shenzhen as part of the city’s “motorcycle ban”. The Shenzhen-based newspaper says that in April this year another 9,532 illegal motorcycles were wrecked in the same way. 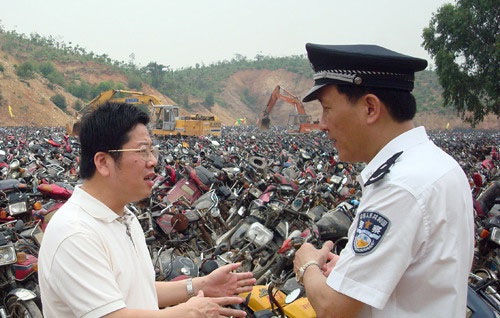 Shenzhen began taking steps to reduce the numbers of motorcycles in the city as early as 1995. In 1998, the city stopped allowing residents to register new motorcycles and in 2003, the city passed regulations banning motorcycles from most parts of the downtown area. Today’s article says that since 2003 when the ban took effect, a total of over 580,000 motorcycles and electricity-powered bicycle have been confiscated.

That report was from 2008, but nothing's changed. From a report dated July 22nd last year:

More than 3,000 illegal motorcycles and other illegal vehicles are being destroyed in a parking lot of Guangzhou, capital of South China's Guangdong province on July 20, 2011. 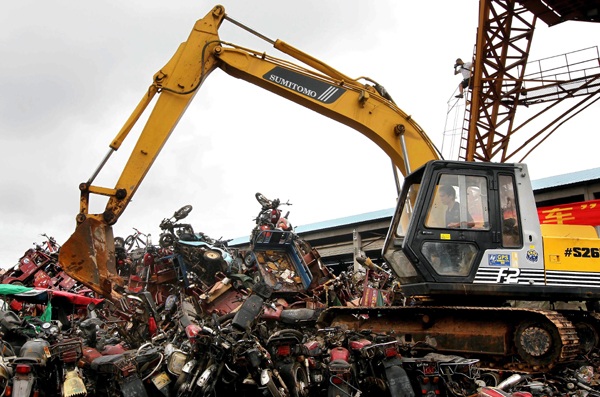 Local traffic police confiscated the vehicles during a recent crackdown on the illegal operation of five types of vehicles - tricycles, motor tricycles, wheelchair tricycles used by the disabled, electric bicycles and motorbikes.

Yep. When Big Brother insists on licensing everything you buy, and use, and do, it's a simple step to withdrawing - or refusing to grant - those licenses, thus turning you into a criminal whether you like it or not. At the moment, I think Americans still have enough moxie to (literally) be up in arms about having their property actually destroyed by an arbitrary action of government; but I'm no longer so sure of that as I once was. One can become so conditioned to accepting government oversight of every aspect of one's life that one can cease to function as a free, independent human being. I daresay that's what most governments count on . . .

Food for thought - and motivation for action!

Well if the Gov. absolutely, positively wanted to make my friends go completely bat-shit berserk crazy, I can think of no better way than to try destroying their motorcycles...!

I agree with raven: if you really, really want to provoke an armed response from the citizenry, start destroying their vehicles.