A farmer in Northern Ireland might be forgiven for wondering whether the miracle of the loaves and fishes had come to one of his fields yesterday - although the loaves were conspicuous by their absence! The Daily Mail reports:

A farmer was understandably left fed up to the gills by the sight of fish after a staggering 20 tonnes [44,000 pounds] of mackerel spilled onto his land from an overturned lorry.

It was travelling towards Ardglass in County Down, Northern Ireland, last week when it appeared to have caught a grass verge, ploughed through 30 yards of hedge and fallen into a field belonging to Gordon Flinn, 71.

A digger and a crane were called in as 12 men worked for seven hours straight in a ‘large scale’ clean-up operation following the accident.

Mr Flinn, a sheep and cattle farmer, said the fish were piled up to two feet deep in places. 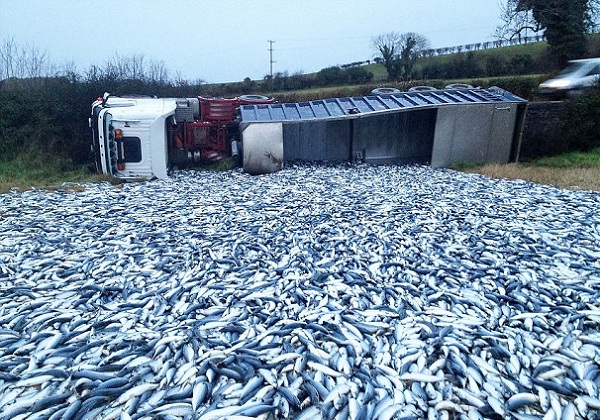 He said: ‘We had a call from the police about 3pm, saying there had been an accident down by my land and that there were fish everywhere.

‘The driver had hit a verge and the fish had come down on the hedge, destroying it and spilling them all into my field.

‘When I got down there I expected to see boxes of fish fingers or something - but there was a 20 tonne silver sea of fish. It was quite a sight.

‘There were thousands of the things all over my land. It was a bit of a shock to say the least.

‘It took them from about 7pm to 2am just to clear it all up. It was about ten metres in diameter - they were all over the place.

‘The one really bizarre thing was though, is that there wasn’t a smell of fish. I think there was more than enough to feed the 5,000. We could have fed the 5,000 five thousand times over.

‘I didn’t take some for dinner - I don’t think I could look another fish in the eyes for a long time.’

There's more at the link, including more (and much larger) pictures.

I understand fishmeal is used as a fertilizer; so in the farmer's shoes, I'd probably have plowed the fish into the field, and looked forward to a record harvest later in the year!

I imagine cats in that area will be wandering around dazed-looking for weeks to come.

The "fishy smell" comes from fish that are not in best condition, so he could have put some in the freezer.

It's fortunate that the mishap did not happen on a hot summer day.