A remarkable display of faith in action


Many Christians - many non-Muslims from any and all backgrounds, for that matter - don't understand just how central the Koran is to Islam. Perhaps I should try to explain that before going on.

To Christians, the living person of Jesus Christ is the Word of God. The Gospel of John states at its commencement:

"And the Word became flesh and dwelt among us, and we beheld His glory, the glory as of the only begotten of the Father, full of grace and truth." (John 1:14, NKJV)

In that light, to call the Bible the Word of God is not sufficiently precise. Biblical theology would rather argue that the Bible records what was said and taught by the person who was, and is, and will forever be, the living Word - Jesus Himself. Therefore, in that context, it's more correct to say that the Bible contains the Word of God, rather than that it is the Word of God - a title reserved to Jesus in person by the Bible itself.

To Muslims, however, the Koran is far more than their equivalent of the Christian Bible. They believe that its text was literally dictated, word-for-word, to the prophet Mohammed by the angel Jibrīl (Gabriel). As such, the text itself is sacred: the words of the Koran (always in the original Arabic, the language in which they believe it was dictated) are, in that sense, equivalent in stature to how Christians regard Jesus Christ himself. That's why desecration of the Koran arouses such anger among Muslims. In their eyes it's an insult to God himself, not just damage to or disrespect for the pages of a book.

That's also why elaborate editions of the Koran have traditionally been regarded by Islam as an expression of piety and reverence for God. To a Christian, a highly decorated Bible may be a work of art, but it has no particular holiness in and of itself - it's just a book. Not so for an ornate copy of the Koran. The effort put into embellishing it is an act of worship, and the finished book has, in Muslim eyes, a sacred status vastly greater than that accorded to any Bible by Christians.

In that light, you'll understand why the inauguration of a vastly oversized, hand-drawn copy of the Koran in Afghanistan was an occasion of enormous religious significance in that country. The Daily Mail reports:

The completion of the world's largest Koran was hailed as a major achievement for Afghanistan when it was officially unveiled in the nation's capital. 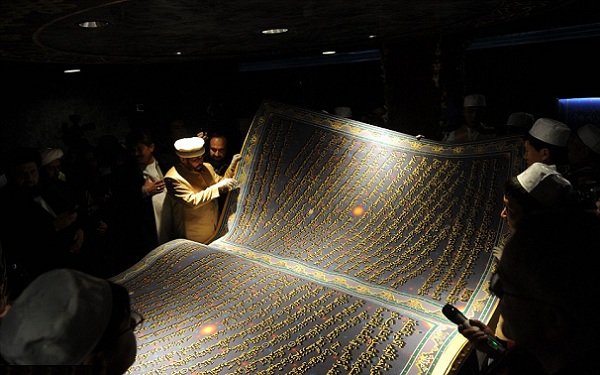 Its inauguration ceremony was held yesterday in front of key religious figures, clerics, scholars and government officials to coincide with the opening of Hakim Nasir Khusraw Balkhi Cultural Center and arts exhibition in Kabul.

Calligrapher Mohammad Saber Yaqoti Hussaini Khedri and his students started the composition in September 2004, which involved at least two years of continuous work for the shafting and archiving.

All the 30 parts of Koran has been done in 30 different designs. It was finally completed in September 2009.

There's more at the link, including more (and much larger) photographs.

Let's hope and pray that the devout faith displayed by those who created this work may spill over into their fractured, tormented country, and help to bring peace. Yes, that may be a pipe-dream . . . but I'll pray for peace for them regardless. If I pray for it for myself, who am I to deny prayers for it to others?

That veneration for the written text of the Koran is why I cringe every time I hear about another riot caused by someone started a rumor that a non-Moslem was using paper that may have once been a Koran.

As an an aside, if you get an English-language Koran, it will probably come with a disclaimer that this is an interpretation of the meaning of the Koran and not a "real" Koran, because of the translation.

For all its good intentions, this is just idolatry -- literally -- writ large.

Idolatry: Assigning to the representation of a thing the honors that the thing itself is due.

Thornharp, from your perspective (and that of Christianity in general) it's true to say that - but it's NOT true for Muslims. We don't have the right to call any of their beliefs 'idolatrous' if they don't judge those beliefs according to our standards. If we expect them (or anyone) to accept and tolerate our faith, we have to extend the same acceptance and tolerance to all other faiths. Only when a given faith seeks to restrict our own freedoms may we withdraw that tolerance, and resist it.

Well this explains why the Iraqis are so torn over what to do with the world's worst copy - the one Saddam Hussein had written in his own blood.

I am not being facetious, but may we now withdraw that tolerance as Muslims are killing Christians around the world? After 9/11? Am I missing the point?
PS: My word verification was "pride." Ouch.

You've got at least four major branches of Islam, at least as they affect us.

* The Shi'ites are overall more mellow than most of the Sunnis. This is what Iran is full of, and some scattered elsewhere. Put simply, we should never have had a problem with them in the first place, except that in 1953 I think it was, the CIA helped depose a reasonable government in Iran and helped install a dictatorship (the Shah). Once the Iranians threw out the Shah (and with superb reasons for doing so such as secret police, political dungeons, etc.) we got labeled "the great satan" and again...sorry, but there was a reason.

* The Sunnis are overall a bit more "old school" than the Shi'ites. Not by a huge amount.

* The Wahabbis are a serious pain in our butts - a severely fundamentalist branch of Sunni, and what infests Saudi Arabia. When you gas up your car, you're helping pay for the spread of severe-grade Wahabbi teachings through the "Madrassas" system across the Islamic world, all through the "'Stans", as far away as Britain and even the US. This is what Osama Yo Mama was, the Taliban, etc.

* The Sufis on the other hand are generally the most reformist branch of Islam (and still mostly considered Islamic). Seldom a problem for anybody, probably at no greater rate than Methodists or the like.

There are also "Islamic off-shoots" that are considered far enough astray to be thought of as "heretics" by the more fundamentalist types. Best known are probably the Ba'hai (very pacifistic, harmless, getting killed by the bushel in Iran and persecuted in Saudi Arabia) and the Sikhs mostly in India who kinda mix Islam and Hinduism (sorta - it's...odd). The Sikhs are OK as long as you leave 'em alone - "warrior history" but geared to defense.

Here's the other hard part: sorting out just what practices are "Arab culture gone wacko" and what are "Islam". The Arabs were already very sick puppies when Mohammed came along...ghastly trends in the area of female sexuality for starters. One belief Islam put a halt to was the killing of a family daughter before puberty so that she died a virgin and could help the family in the afterlife or somedamnthing. So they had "issues" going way back, and a lot of it has transferred to how the Arabs view Islam.

The Sunnis being mostly Persian and culturally different have less of that baggage along, which is why our screwing them over in '53 was such a crappy idea, it picked a multi-generational fight with people we otherwise could have gotten along with.

Now add one more twist: Britain's policies and practices in the Middle East also pissed 'em off going back 100+ years, so when WW2 started elements of the Islamic world often allied with the Nazis. So you get Iran being called Iran in the first place (local word for Aryan), you get Yasser Arafat's uncle in Berlin doing radio broadcasts for Hitler and helping recruit a Bosnian Islamic Waffen SS division, you get Nasser in Egypt praising Hitler publicly well into the 1950s and beyond, you get Michael Aflak studying in Berlin pre-war and then founding the Ba'ath party in Syria and Iraq leading straight to Saddam, etc. etc.

When the Jews showed up, whooops, they were walking into THE top area of remaining Nazi idealogical support. No surprise that led to trouble!

Blowback, folks. It really stinks, and it's real, and we have to stop acting line rampaging lunatics and end this whole "Team America: World Police" foreign policy idiocy.

Think Bertrand Russell, who said: "Man is a credulous animal, and must believe something; in the absence of good grounds for belief, he will be satisfied with bad ones."