The lethal perils of wingsuit flying


I've posted several video clips of BASE jumping and wingsuit flying on this blog. I've commented repeatedly that I regard them as very dangerous sports, in which I wouldn't choose to participate. That was driven home for me in a terribly graphic way today.

I came across a photo spread in the Telegraph about 'The highest, tallest, longest and oldest bridges in the world'. The third picture in the collection was this one, depicting the Royal Gorge Bridge in Colorado, USA. 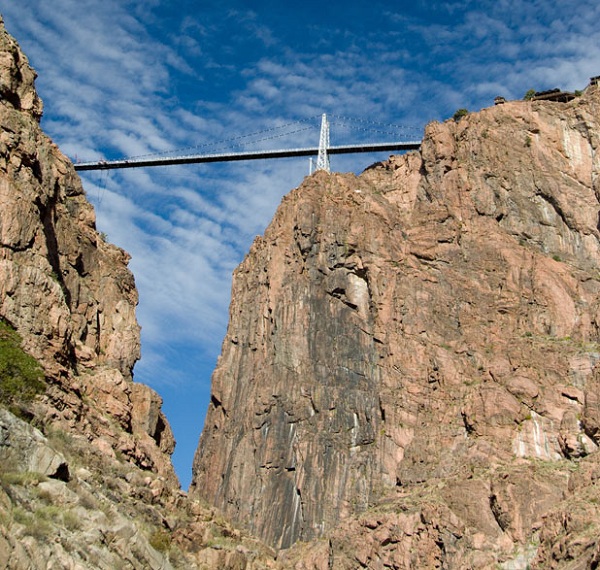 While looking at the pictures of bridges in the photo spread, I was clicking over to Wikipedia and looking up their entries. That for the Royal Gorge Bridge included this chilling information:

In October 2003, while performing a proximity demonstration, wingsuiter Dwain Weston was killed attempting to fly over the bridge. Weston was wearing a wingsuit, a skydiving suit with fabric extended below the arms to the body and between the legs to catch air allowing for horizontal travel when skydiving. Weston was to go over the bridge while fellow skydiver Jeb Corliss was to go under it. Miscalculating his distance from the bridge, Weston struck a railing while traveling an estimated 120 mph, killing him instantly and dismembering extremities. Cleanup from his impact took two full days, and many parts of Weston's body were never recovered.

I couldn't help but recall the many videos I've seen (and posted here) where wingsuiters flew very close to mountainsides or dangerous terrain. Here was a case where one of them had come just that little bit too close. Searching for more information, I found an Australian newspaper article about the event (Mr. Weston was Australian). I also found this video clip narrated by his partner, Jeb Corliss. It doesn't show the moment of impact, but you can hear it: and it shows what happened immediately before it, and afterwards. Don't view it if you're sensitive about such things!

May Mr. Weston's soul rest in peace . . . and may his tragic example inspire other wingsuiters to be a bit more careful out there!

Labels: Boys and their toys, Danger, In Memoriam, Sport, Tragedy
Email ThisBlogThis!Share to TwitterShare to FacebookShare to Pinterest

it's not the wingsuit that is so inherently dangerous, it is the proclivity for flying as close as possible to hard objects. And the fact there is no way to increase lift to pull up if they get the glide angle figured wrong.
The accident that will change this sport is going to be when one of the wingsuiters hits a group of spectators-there was one clip you have posted of a guy just missing a group standing at an observation point at a switchback on an alpine road.