Now and again a story emerges that makes me smile, and brings a tear to my eye. This is one of them.

The last time they left their footprints in the sand together the beach was awash with blood.

Bill Betts and Clifford Baker were young men back then, storming ashore in the D-Day landings against a hail of mortar and machine-gun fire.

Separated when Bill was felled by enemy bullets, they each feared the other must surely have died.

Now, more than 67 years later, the pair have been reunited after a chance encounter at the same Normandy beach. 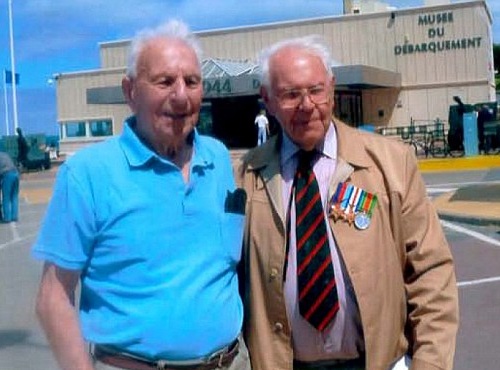 In a startling coincidence, the two men were separately revisiting Gold Beach at Arromanches in pilgrimages to remember those who never made it home in 1944.

When Bill signed the leather-bound remembrance book at the town’s D-Day museum, the name above his was Clifford Baker. He didn’t know it then, but the ink was almost still wet.

‘I couldn’t believe my eyes when I saw his name but there it was in black and white,’ said Bill, 88. ‘I’d just been given a commemorative medal by the Mayor of Arromanches so I asked her when Mr Baker had been into the museum. She said it was only 20 minutes before and that his coach was now boarding in the car park. I decided I had to take the chance to catch him.’

Bill scoured the car park in search of his missing friend. Meanwhile the mayor frantically gave an order for departing coaches to be stopped.

Then, to cheers and applause, Clifford came down the steps – and into the embrace of the comrade he was forced to leave behind all those years ago.

I defy anyone with even half a heart not to be touched by that story!

That's just amazing. The experience of meeting USS Arizona survivors at Pearl Harbor last year left me in tears, and now I've got something in my eyes again.

Wonderful story. Thanks for posting it, Peter.

The irony of location is stunning. Call it Karma. Thank you!!

Damn, that would make a divorce lawyer cry.