That's a lot of money for a broken goblet!


Only kidding. This goblet is special. 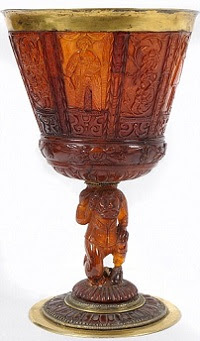 The 300-year-old vessel is split in to two pieces [at its foot] and had to be held together by Blu-Tack so auctioneers could take a photograph of it.

They then returned the delicate item to a tin box where it has been stored by the family that has owned it since the 19th century.

It is carved with scrolls, figures and fruit and caused great excitement at the Lawrences auction rooms in Crewkerne, Somerset where it sold.

Despite its stem being snapped, collectors and dealers were prepared to dig deep in order to win the 17th century receptacle.

It is believed the piece was made by Jacob Heise, who was a popular craftsman in Konigsberg, Germany, between 1654 and 1663.

The amber, which is fossilized resin, washes up on the coast near Konigsberg and each panel of the cup was made separately then stuck together.

The stem was carved as a figure of a kneeling man and the foot and the rim were mounted with silver gilt.

Experts believe it could have been made for a wedding because it has alternating men and women depicted in the panels and is decorated with fruit, possibly indicating babies.

There's more at the link, including more (and larger) photographs (a couple of which show the break in the stem).

OK, I have to admit, I'm impressed! To think of a seventeenth-century craftsman painstakingly gathering individual panels of amber, carving each of them, then gluing them together to form a goblet like that . . . I wonder how long it took, and what the contemporary price of such a piece might have been? If you think of the hours of skilled labor that went into its creation, such a cup must have cost a pretty penny even way back then. It would certainly have been a rich man's 'show-off' piece, I think. Amazing to think that it's lasted so long, and in such good condition.