The secret history of Project Azorian


In connection with my post a few days ago about attempts to increase secrecy about the existence (or otherwise) of official US government documents, I read about something known as the 'Glomar response'. Wikipedia describes it as follows:

In United States law, the term Glomar response (aka Glomarization or Glomar denial) refers to a "neither confirm nor deny" response to Freedom of Information Act requests.

The Glomar Explorer was a large salvage vessel built by the Central Intelligence Agency for its covert "Project Azorian" — an attempted salvaging of a sunken Soviet submarine. Aware of the pending publication of a story in the Los Angeles Times, the CIA sought to stop the story's publication. Journalist Harriet Ann Phillippi requested that the CIA provide disclosure of both the Glomar project and its attempts to censor the story, to which the CIA chose to "neither confirm nor deny" both the project's existence and its attempts to keep the story unpublished.

The "Glomar response" precedent still stood, and has since had bearing in FOIA cases ...

I knew of the Glomar Explorer, of course (shown below), and 'Project Azorian', the operation to build and use the ship to try to raise the sunken Soviet submarine K-129. 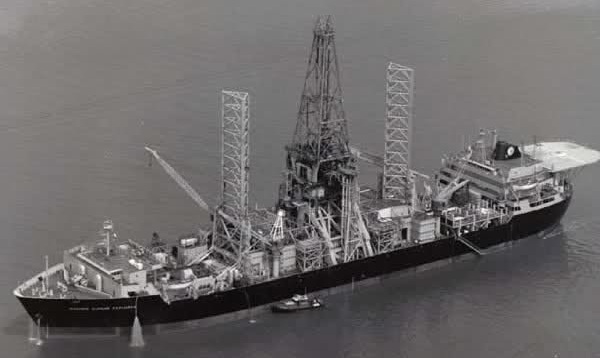 During my reading about the 'Glomar response', I was intrigued to come across a (heavily redacted) official CIA report about Project Azorian, released just last year. (The link is to an Adobe Acrobat document in .PDF format.) The report states:

In March 1968 a Soviet submarine of the G-II class was lost with all hands, 16,500 feet below the surface of the Pacific Ocean.

AZORIAN ranks in the forefront of imaginative and bold operations undertaken in the long history of intelligence collection. It combined immense size and scope, advanced technological development, complex systems engineering and testing, unusually severe cover and security requirements, a demanding mission scenario in an unforgiving marine environment, the potential for a serious confrontation with the Soviet Union, a difficult and technically unusual exploitation phase, and high cost.

There's much more at the link, plus more background information and other references at this companion article. If you have the time and are interested in the subject, they make fascinating reading - albeit a little frustrating at times, thanks to the extensive deletions in the CIA document! Even so, it adds new dimensions to what had previously been disclosed, and corrects some popular misconceptions.