I see that Odyssey Marine Exploration is in the news again, both negatively and positively.

On the negative side, the company was ordered last month to hand over to Spain some 17 tons of treasure recovered from a ship believed to be the Nuestra Señora de las Mercedes, sunk in 1804. The treasure was salvaged by Odyssey and flown to the USA in 2007. The company has announced its intention to appeal the ruling, but I think international maritime law is definitely on Spain's side. I note that the company has deliberately failed to positively identify which ship the treasure came from - a sure sign, in my opinion, that they know damn well what ship it is, and they're trying to conceal its identity because they know they don't have a legal leg to stand on. I think their tactics give an overwhelming impression of dishonesty.

Be that as it may, less than a week later, Odyssey announced its discovery of the wreck of the SS Gairsoppa, a British merchant ship sunk during World War II with a fortune in silver on board.

Odyssey Marine Exploration said it had confirmed the identity and location of the shipwreck site, nearly 4,700 metres [well over 15,000 feet] below the surface of the North Atlantic, about 300 miles off the coast of Ireland in international waters. 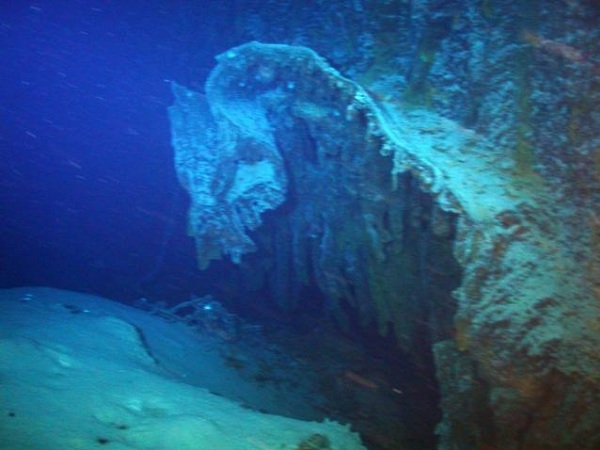 A torpedo hole in the side of SS Gairsoppa

The company said in a statement: "Contemporary research and official documents indicate that the ship was carrying £600,000 (1941 value) or seven million total ounces of silver, including over three million ounces of private silver bullion insured by the UK government, which would make it the largest known precious metal cargo ever recovered from the sea."

In 2010 the UK Department for Transport awarded the company, through a competitive tender process, the exclusive salvage contract for the cargo of the ship.

Under the agreement, Odyssey will retain 80 percent of the value of the silver.

There's more at the link. A video clip of footage shot by Odyssey's underwater remotely operated vehicle (ROV) may be viewed here. At today's prices, the SS Gairsoppa's cargo may be worth as much as US $243 million.

The good news didn't stop there. Odyssey announced today that its exploration vessel, the Odyssey Explorer, has discovered the wreck of another British merchant ship, the SS Mantola, which was sunk by a German submarine during World War I. It lies only about 100 miles from the wreck of the SS Gairsoppa.

An Odyssey spokesman said the Mantola was insured to carry silver worth £110,000 when it sailed in 1917. 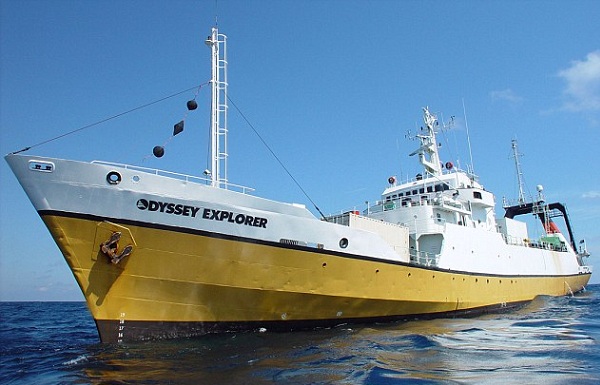 That value would mean the ship could hold as much as 600,000 ounces of silver, based on silver prices in 1917. At current market prices, that much silver would be worth more than $19 million.

Odyssey will retain 80 per cent of the value of the silver that's recovered.

So, the company may (depending on the final outcome of a protracted legal battle) have to surrender several hundred million dollars' worth of treasure to Spain; but it may be able to refill its coffers with a couple of hundred million dollars' worth of silver from the two recently discovered British merchant ships. You lose some, you win some . . . but I wish the company would have acted more legally and ethically in the case of the Spanish ship. When greed leads to shenanigans such as those that have been exposed in court, it doesn't matter how praiseworthy or exciting a company's discoveries may be; they're tainted by the impression of dishonesty. Quite frankly, I don't know that Odyssey will ever be able to free itself of that. Their behavior has been heavily criticized in the past, and the most recent court ruling appears to have agreed with that perspective.

I don't know all the details regarding the Spanish ship but my gut reaction is the salvage crew should not have to surrender anything. The salvage crew did all the work and now Spain which did nothing to recover the treasure thinks it should receive the treasure. Where has the Spanish been the last 100 years? If the salvage crew isn't allowed to keep it they should dump it back where they found it and tell Spain to go get it.

I too have a gut reaction. If 'Spain' wanted the treasure, they damn well should have gone and gotten it themselves. It was there waiting for them. NOW who are the 'plunderers'?

If I had put forth all the effort to recover such, and been ordered to give it away to someone who never lifted a finger in the task... I would be sorely tempted to dump it overboard back at the site and tell them to get it themselves.

Guys, that's all very well, but Odyssey didn't have the right to recover the treasure in the first place! Maritime law is settled on that point. If they'd gone after a wreck that wasn't clearly under Spanish government jurisdiction, but in a sort of legal 'gray area', I could understand their position: but they've literally defied established legal precedent. You just can't do that and expect to get away with it.

The silly thing is, if they'd bothered to negotiate beforehand, they might have come to some agreement with the Spanish government to keep a portion of the proceeds for themselves, and been given permission to proceed. That's what they did with the British government to get salvage rights to the two latest ships. Because they wouldn't accept the lower percentage Spain was prepared to offer, they're likely to lose the lot.

No, in this case I can't agree. Finders is definitely not keepers, in terms of maritime law. That's just the way it is, and all parties knew that before the first dive ever took place. Under those circumstances, Odyssey set themselves up for a fall.

Law? Law is there to legalize theft. Ask Bastiat about it. Spain has a damn lot of chutzpah to be invoking the law, after the way they obtained that gold in the first place.

If the Law of Salvage makes a claim valid for ships found within hundreds of feet of shore, and for ships lost or abandoned for more than 1 year, then this ship meets all the requirements. I'm still not clear under what standards Spain is laying claim to a lost ship and its' cargo, or if it would even make a claim were the price of precious metals not so high and the world economy not so low. Notably, Spain has made no effort to find or recover it's ships, most of which lie outside its' territorial waters, even though it could have rented or bought or made partnership with those firms who have the technology needed. Spain made it's claim only after the discovery was announced. The U.S. Judge who ruled in Spain's favor is probably one of those who argues that US Law must cede to other country's law, and perhaps an investigation into the judge's finances may be in order.

Spain's stealing this recovered cargo will guarantee that the next time a cargo is recovered, they will simply melt it down to ingots, or some other form that can't be traced to a specific ship. More unintended consequences of political meddling.