A nation embraces an animal?


Readers may be familiar with this video clip of a red hartebeest running over a cyclist in the KwaZulu-Natal province of South Africa a few days ago. It seems to have gone viral on YouTube.

What amuses me is that the incident appears to have inspired local cartoonists. A rampaging antelope is now being shown trampling unpopular politicians, public servants involved in corruption or scandals of one kind or another, and so on. One of my favorite South African cartoons, 'Madam & Eve', came out with this cartoon last weekend. 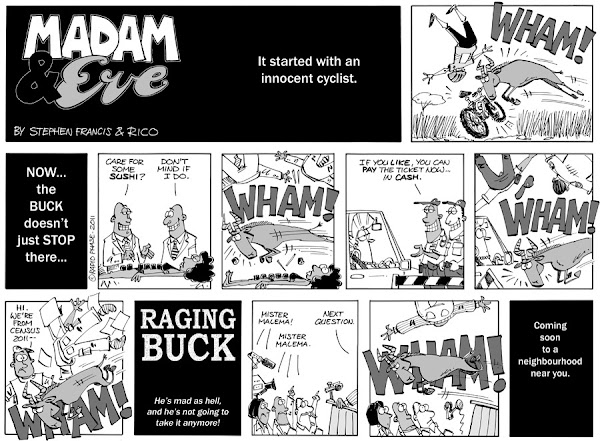 ("Mr. Malema" refers to Julius Malema, the scandal-plagued President of the African National Congress Youth League.) The cartoonists have drawn two more cartoon strips about the animal. Other South African cartoonists are stepping up to the plate as well.

I do like the African sense of humor . . . it's raw, down-to-earth and basic, but a whole lot of fun!

Send him to Washington.