Bloomberg points out that for the first time in history, US debt per capita is about to exceed US Gross Domestic Product per capita.

The amount owed will reach $46,771 per person, surpassing the $46,750 in output, according to Bloomberg calculations using the IMF’s deficit and growth projections from its September World Economic Outlook. Debt will exceed production by $8,000 per person by 2016, reversing GDP’s $18,400 advantage as recently as 2007, before the world’s largest economy fell into the recession and government spending surged. 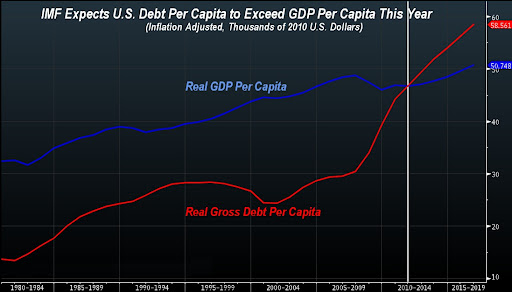 “It’s a milestone in an unsustainable trend,” said Robert Bixby, executive director of the Concord Coalition, an Arlington, Virginia-based group that calls for a balanced budget. “What’s alarming is there is no end in sight.”

“It just doesn’t seem like the political system or the public really has come to the point where they are ready to make some basic compromises,” Bixby said. “People lament the debt, but so far we have no realistic strategies for dealing with it.”

To put this into perspective, it's as if your household just reached the point where every cent you earn in a year is matched by the cumulative debt you owe. If the salaries and wages of everyone in your household add up to (say) $60,000 per year, you also owe $60,000 - and it's getting worse. Your debt load is never reducing, always growing. Also, as David Galland of Casey Research notes:

We now have to look to the consequences of that growth – namely that in order to sustain itself, Uncle Sam must gobble up great gobs of capital that would have otherwise gone to productive pursuits. And to avoid being put on the diet that Dr. Bond Markets would normally prescribe, Uncle Sam must cheat pensioners and savers out of their yields by artificially suppressing interest rates.

Such growth in our national debt is completely unsustainable; yet our politicians just don't seem willing or able to do anything about it. Even with the change in control of the House of Representatives this year, Republicans haven't succeeded in slowing down spending (or perhaps they never even tried!). Investors Business Daily reports:

When Republicans took control of the House in January, they pledged to make deep cuts in federal spending, and in April they succeeded in passing a bill advertised as cutting $38 billion from fiscal 2011's budget. Then in August, they pushed for a deal to cut an additional $2.4 trillion over the next decade.

Some analysts have blamed these spending cuts for this year's economic slowdown.

But data released by the Treasury Department on Friday show that, so far, there haven't been any spending cuts at all.

In fact, in the first nine months of this year, federal spending was $120 billion higher than in the same period in 2010, the data show. That's an increase of almost 5%. And deficits during this time were $23.5 billion higher.

Nor does the claim that state governments sharply cut spending stand up well to closer scrutiny.

Overall state spending continued to climb right through the recession, when all money from state general funds and other funds, federal grants and state bonds is combined.

Total state outlays in 2010 were almost 10% higher than in 2008, according to the National Association of State Budget Officers' annual State Expenditure Report.

I've said it before, and I'll say it again. We cannot continue to spend money we just don't have. Every penny of these increases in expenditure represents borrowed money. In fact, close to half of all US government expenditure is borrowed money. Unless we can return to spending only what we make, we're economically and financially doomed to bankruptcy - or to ruinous inflation as our puppet masters debase our currency to erase their mistakes (at our expense, of course).

We'd better elect politicians who'll accept reality, and do something about it . . . or we're terminally screwed. (See my comments below about the need for a Tea Party equivalent on the left, and what such organizations could do together, if they tried.)

I believe that it's already the case - to the accuracy such measurements can be stated.

Remember, the Fed.gov hydra has distorted every statistic, every economic measure that can make them look bad. John over at ShadowStats makes a tidy little living keeping the figures the old ways.