That tested it, all right!


Courtesy of reader Snoggeramus from Australia, we learn of a car test drive that was . . . well . . . testing in the extreme! 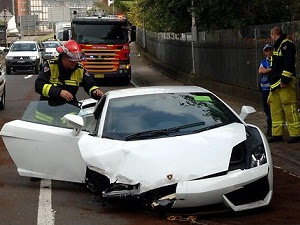 A prized $400,000 Lamborghini was left a mangled mess after a test drive through the city went horribly wrong.

The prospective buyer was behind the wheel of the white Lamborghini Gallardo when he lost control of the vehicle, hitting a barrier on the Macquarie St entry to the Cahill Expressway about 9am yesterday.

Lamborghini Sydney salesman Ian Watts, who was in the passenger seat at the time, had the nerve-racking job of calling his boss and telling him about the damage caused to the luxury vehicle.

The front of the car was a complete wreck, with the impact ripping the front right-hand wheel from its axle and the bonnet from its hinges.

He said the customer was not speeding at the time of the incident, and would not be required to pay any damages.

I'm amazed that an insurance company would be willing to insure a car like that in the hands of a test driver who might not even want to buy it (or be able to afford it, for that matter). After all, asking for a test drive is perhaps the only way most of us will ever get our hands on the wheel of a Lamborghini - and since it's not ours, why not open it up a bit?

Labels: Accidents, Automotive, Boys and their toys, Mistakes, Oops, The Mind Boggles
Email ThisBlogThis!Share to TwitterShare to FacebookShare to Pinterest

Very often you have to put down a very large cash deposit in order to test drive an exotic vehicle such as this, somewhere in the neighborhood of $15,000-$25,000. This helps prevent someone like myself from taking a test drive every Saturday morning. :-)

Back in the early 50's when we were newly arrived from Germany, my sister ordered, and had delivered, a Jaguar. Don't how she did it, as she was only 15, but she did. It was a favorite dinner topic when my children were growing up. Thank you, God, that dealers now require more than some cockamamie tale spun by some cute chick.

a few years back I was lucky enough to find a salesman that wanted to test drive the new mustang cobra as much as I. We had a great time, but I suspect only because the manager was off that day or the salesman was quitting his job. I have never found another dealership that would allow any super top end cars off the lot without money up front.