In this case, it struck rather more tragically than usual. Miss D. sent me a link to this story.

The round passed through Emery’s wrist and struck him in the chest. He was flown to Johnson City Medical Center for treatment. As of 9:20 p.m., Emery was listed in stable condition.

Emery, who is also an instructor at the shooting range, told an SCSO deputy the shooting was accidental. He said it happened when a piece of hot brass went down the front of Crandell’s shirt as she was shooting down range.

Crandell told investigators she “jerked” when the hot brass went down her shirt, accidentally discharging the pistol.

I've seen a cartridge case go into an open shirt on three occasions - and each time it led to some interesting reactions. Low-cut T-shirts or open-neck shirts are not, repeat, NOT the right clothing for a shooting range! A hot cartridge case, ejected by a pistol or rifle, is quite capable of inflicting a second- or third-degree burn on soft, tender skin. The picture below shows the burn produced by a .22LR cartridge case (the same type used by Ms. Crandell) on a shooter's neck. The burn mark is circled in red. (I'm obliged to reader Mark L. for sending me the image.) 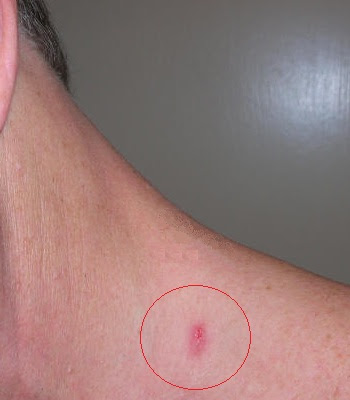 Frankly, I blame Officer Emery for not warning his girlfriend about the possible consequences of wearing clothing like that at a shooting range. On the other hand, I daresay he's now a whole lot more likely to remember to do so in future!

I once had a casing from an M1 carbine go down my jacket collar. Just plain nasty.

I was shooting my rifle prone, and an ejected cartridge landed right on top of my safety glasses, right under the brim of my boonie cap. Needless to say, I brushed the danged thing away very quickly!

Several years ago I was teaching a friend to shoot at our local indoor range. I was standing opposite of the ejection port and her first shot still managed to ricochet off the booth divider and struck me in the middle of the forehead. It left a lovely crescent shaped burn that persisted for a couple of weeks. Looked like a muslim bindi actually...

I've had two cases ricochet off the side of the lane divider at my indoor range and get wedged inside my safety glasses. Both times, fortunately, my reaction was to take my finger off the trigger before using my other hand to whip off the glasses and say unfortunate words. One time, the range staffer told me I shouldn't remove the safety glasses while in the lane. I said some more unfortunate words.