I was astonished to read a report in the Daily Mail about a new book describing England's Crown Jewels. The article includes this photograph: 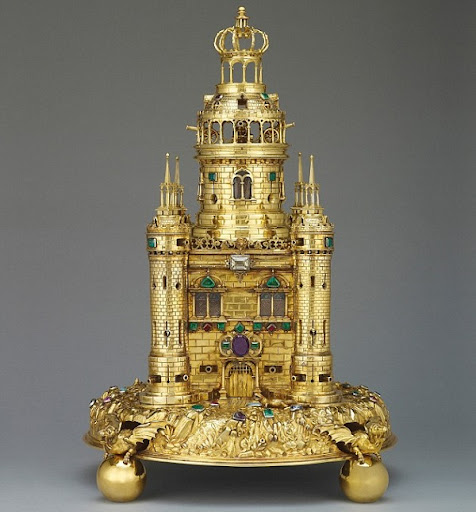 Believe it or not, that's a salt cellar! It's known as the Salt of State, or the Exeter Salt after the city which presented it to King Charles II. After seeing the picture, I looked around the Internet for more information, and found this at the BBC:

The Salt, which is in the shape of a turreted castle and encrusted with 73 jewels, was made by Johann Hass of Hamburg in 1630.

The city gave the ornate object to the new king to win back favour after the Civil War, in which it had sided with the Parliamentarians.

It was used for Coronation banquets in Westminster Hall until the reign of George IV, and is now on permanent display in the Tower of London's Jewel House.

The thought of making something that ornate and costly, just to hold salt, boggles my mind!

Labels: Amazing, Art, Boys and their toys, History, The Mind Boggles
Email ThisBlogThis!Share to TwitterShare to FacebookShare to Pinterest

FABULOUS! I'd like to borrow that for Thanksgiving, if it's ok with Liz. :)

Salt was extremely expensive during the time of King Charles II.
2000 years ago "salt" was given as part of their payment to Roman soldiers hence the word salt became the word salary.
One sat "below the salt" in medieval times so it was not unusual for "salt" to be so honored with a dramatic container to be set on the "king's table".

If it keeps your head on your shoulders, it's worth every penny.