67 years ago today, the Battle of Leyte Gulf began off the Philippines. By the time it ended, three days later, 32 warships were at the bottom of the Pacific (6 US, 26 Japanese), and the Japanese Navy had been eliminated as a force of any consequence in the future conduct of World War II. 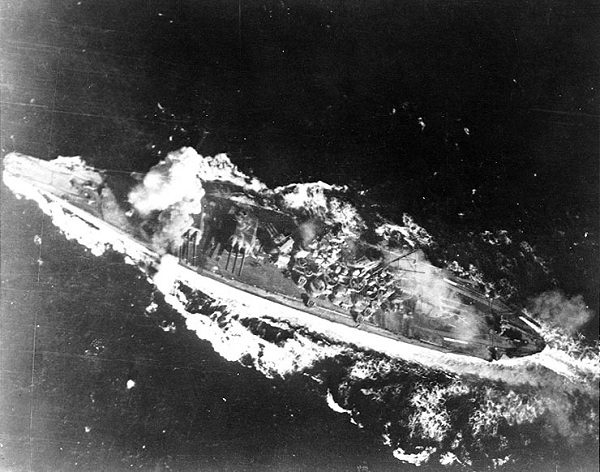 The Japanese super-battleship Yamato is struck by a US bomb on her forward
main armament turret during the Battle of the Sibuyan Sea, October 24th, 1944

The Battle of Leyte Gulf comprised four major engagements, each a battle in its own right:

There were also several minor engagements. The Battle of Leyte Gulf also saw the first use of deliberate suicide strikes by Japanese pilots, which would become known as kamikaze attacks. One of them sank the US escort carrier USS St. Lo, shown below, exploding after the attack. 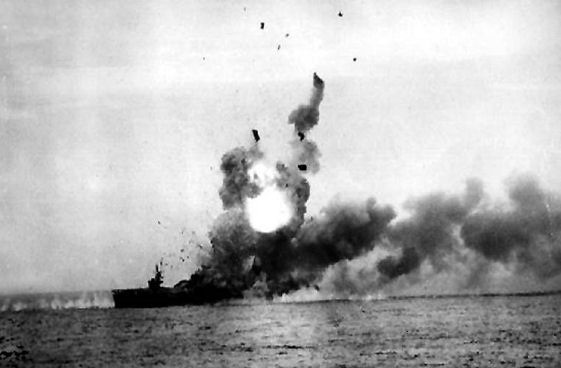 The Battle of Leyte Gulf marked the coming together of the two prongs of the US assault on Japan across the Pacific. The South Pacific prong, under the command of General Douglas MacArthur, joined the Central Pacific prong, under the command of Admiral Chester Nimitz. From now onward the two forces would operate together against Japan. Final victory was less than a year away, although it would exact a terrible price in human lives and suffering from both sides.

In terms of the number of ships, aircraft and personnel that took part, and the size of the area over which it was fought, the Battle of Leyte Gulf was (and remains) the largest naval engagement in history.

Admiral Sprague's Task Unit 77.4.3 ('Taffy 3') saved Macarthur's landing fleet, not to mention Halsey's bacon. This lopsided US victory missed being a disaster by just a few missed communications by the Japanese, and the incredible heroism and aggressiveness of Sprague's jeep carriers and destroyers.

On a related note, if'n you ever make it anywhere near Fredricksburg, TX (not too far out of San Antonio), make sure to stop in to the Nimitz Museum. You can go view the Admiral's birth house nearby either before or after the museum.

Ironically, this was a subject of discussion last week, while I was overseas... And Anon is correct, in the first battle (of four of Leyte Gulf, Taffy 3 was the decisive factor. Ironically, they had just been transfered from Halsey's TF 38 earlier that week.

Taffy 3 was the first to my mind as well after having read "The Last Stand of the Tin Can Sailors" a few years back. Seems the dust in the room gets stirred up, just like now, every time I think about it.

"This is going to be a fighting ship. I intend to go in harm's way, and anyone who doesn't want to go along had better get off right now."