McClellan Financial Publications specializes in technical analysis of economic and stock market data, providing a subscription service to their clients. From time to time they also publish articles of general interest. A recent one was titled 'It’s the PRIVATE Economy That Matters'. Here's an excerpt.

[This chart] shows how much of total GDP is accounted for by government spending. It may be a surprise to you to see that it has gotten up to the same levels seen at the height of WWII. It was to us. 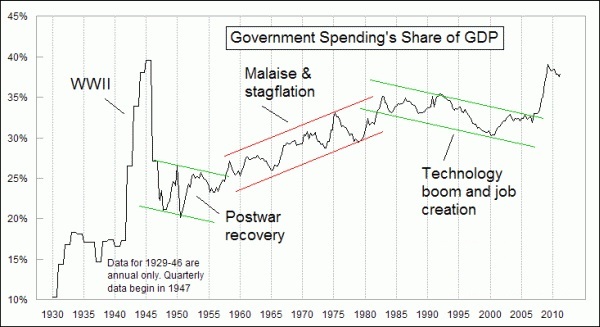 One point to understand is that government spending today is not exactly like it was when Simon Kuznets first developed the formula back in 1934. Back then, if the government spent money on something like a building or a battleship, that was a form of consumption. Somebody made it, and Uncle Sam bought it.

Now, with retiree payments and Social Security, the economists properly have to factor out spending on “transfer payments” like social security, pensions, welfare, and veterans’ benefits. Those payments don’t really involve “production” until the recipient spends them as “consumption”, so they get excluded.

What is interesting to us is that the periods when the government’s share of GDP is shrinking tend to be the better times for the economy. Some might say that, well sure, if there is a strong economy, the private sector will grow faster than the government. We believe that there is something deeper going on.

Rising government spending displaces private activity. If someone gets hired to work for the government, that means he is giving up the possibility of working in the productive sector, AKA the private sector. If a farmer grows a bushel of wheat, the wealth of the whole country will be increased by the value of that wheat. If a factory worker makes a box full of widgets, the country as a whole has its wealth increased by that many widgets.

There's more at the link. I recommend reading the whole article. It's a bit technical, and not light reading, but it repays study (as do many of the articles at McClellan Financial Publications - and no, they're not paying me to advertise them, I just find their Web site a very useful resource).

The article provides the ultimate answer to Jesse Jackson Jr.'s incredibly stupid call for the government to hire all the unemployed (at a cost of a mere $804 billion). That money would have to be taken out of the economy by the government in the first place. The nation as a whole would be poorer as a result. Paying the unemployed with it wouldn't 'boost' the economy at all - it would merely put some of it back (not all of it, because the taxes paid by those unemployed people - now employed by the government - would take it out of the economy for a second time). Overall, if Jackson's plan was adopted, the economy would still lose hundreds of billions of dollars that could have been invested in growth and production, but which would now be wasted on the indigent, for no positive return at all.

Why is it that we keep electing economic illiterates such as Jesse Jackson Jr. to national office? And how can we get them to shut up while those who understand economic reality try to fix the problems people like them have caused in the past with their pork-barrel politics, special-interest spending and rapacious greed?

The article deserves a second reading, but the last par. reminded me of a video posted on Thoughts Just Off Center on Oct. 11th, re Liberals Are Protesting Obama. The usual disinterest in politics doesn't take a vacation when someone like this President comes along and overturns our applecart. Liberals don't recognize each other, and are easy prey for political contenders who seduce them with easy to understand rhetoric. It helps if Dad has paved the way.

Charles Gave of GaveKal makes similar arguments regarding the effect of Govt Spending on GDP growth.