JayG reports that ASM826, blogging at Random Acts of Patriotism, has started a new blog meme:

Mine was a 1966 Morris 1100, light gray in color, in moderately good condition, almost identical to the one shown below. 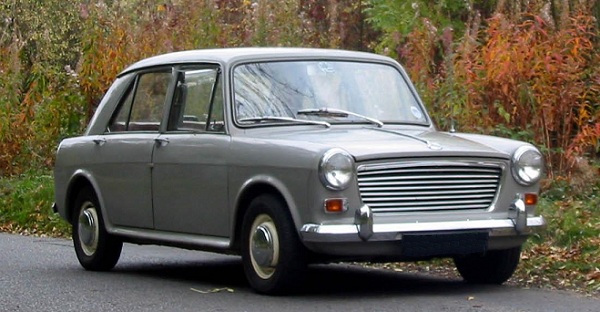 My godmother, God bless her, gave it to me in 1977. I was serving in the South African armed forces at the time, and didn't have enough money to buy a car; so instead of trading in her old one when she bought a new vehicle, she gave it to me.

Adventure? I guess you could call it that. Literally one hour after I got the car, I hit the rear corner of a double-decker bus in Cape Town (almost identical to the one illustrated below, and not five hundred yards from where that picture was taken). 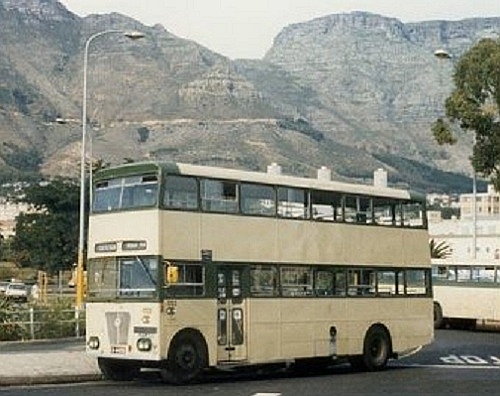 The bus pulled out right in front of me. Unfortunately, my godmother had neglected to inform me that the decade-old brakes on her Morris didn't slow the car down as quickly as might be desired . . . Fortunately the damage was limited to a rather bent, upward- and outward-cocked left front headlight. For the next couple of months, until I could afford to get it fixed, it attracted (and illuminated) what seemed to be most of the owls and moths in the Cape Peninsula when I drove at night!

What happened to it? I'm afraid that the BMC A-series engine powering my little Morris had one grievous fault . . . it sometimes ate its own gaskets. I found out about this the hard way a couple of years after I got the car when, one day, its engine began smoking, steaming and making interesting noises. Pulling off the road, I took off the oil filler cap to reveal a brown sludge oozing slowly upward, overflowing the rim, and dripping down the side of the engine block. The damage was beyond my means to repair at the time, so I regretfully had to sell the car for parts. The proceeds went towards buying a used Suzuki A100 motorcycle, similar to the one shown below, on which I put-putted around the city of Pretoria and the Witwatersrand area for the next couple of years. 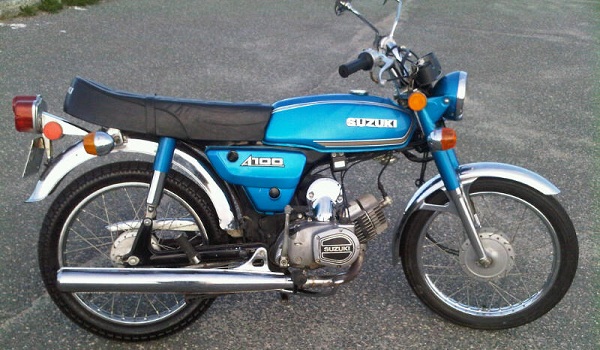 I was fond of my little Morris, and very grateful to my godmother (long since gone to her reward, God bless her) for my first set of wheels.

Labels: Automotive, Blog Memes, Me me me, Other blogs, Warm Fuzzy Happy Stuff
Email ThisBlogThis!Share to TwitterShare to FacebookShare to Pinterest

My first car was an Austin A35, from my granny as well! It suffered from the same malaise: failing brakes - big crash soon after...
Eventually I replaced the front ones with disc brakes off a salvaged Morris Cooper S.

It also ate head gaskets: turned out to be an exhaust valve with only half the disk. The whole lot overheated as a result. I ended up fixing that myself - and giving it a porting treatment, a 40thou "shave" and a double barrel Webber. Which turned it into the fastest A35 I've ever seen!

Dang, I miss that car! Had heaps of fun with it.

Mine was a 1965 Mini Moke 850cc went like sugar off a shovel the weight was nothing and it had a canvas roof and sides no heater and i remember when it snowed it snowed inside as well,thing is i still wish i had that car now!

My first car was a 1973 Ford LTD with a 400 ci engine. First gear wound out about 50 mph as I remember. Mom drove it into a lake, flooding it. Dad needed money to bale hay so I payed for the hay, and got the car. 74 miles later it died. Took the engine apart. Sold the body. Sheriff came by, said they'd fixed it up and were stealing stuff from farms all over the county. Wasn't me.

It's been thirty years since I heard it purr.

My first was a 1980 Datsun pickup, lemon yellow and rust. It survived a round trip from VA to NYC and back, then was parked. I "upgraded" to a 1978 Datsun 510 station wagon, also lemon yellow. Almost. The right rear door was a grayish blue color. That one's also sitting.

Great Story and I enjoyed reading the others too.
Thanks

An hour in the car and you hit a bus.

I, too, have seen that sludge in the radiator. It usually signals the death of that car.

Thanks Peter, and I'd heard brakes were notoriously bad on a lot of Austins, but that one takes the cake! Were they also made by Lucas (Prince of Darkness)?