Back in August I asked, 'What would you buy with $1 million?'. Among the options offered was the 'Frrrozen Haute Chocolate' sundae from the Serendipity 3 restaurant in New York City, which sells for $25,000. It used to hold the record as the most expensive dessert in the world . . . but no longer. Business Insider reports:

Beating the competition, or lets say whipping the dessert competition senseless, this chocolate pudding from Marc Guibert who is the head chef at Lindeth Howe Country House Hotel in Windemere, Cumbria is now the most expensive dessert in the world.

... this luscious chocolate pudding ... is made from chocolate (obviously) but also ingredients like gold and champagne caviar. The final version is glazed with edible gold leaf and then layered with jelly - made from champagne! I dont know about you, but it seems that this chef did not simply want to create a record ; he wanted to create a delicious dessert too. The description itself is mouthwatering to say the least. Used in the pudding are four different types of Belgium chocolates flavored with a combination of peach, orange and whiskey. 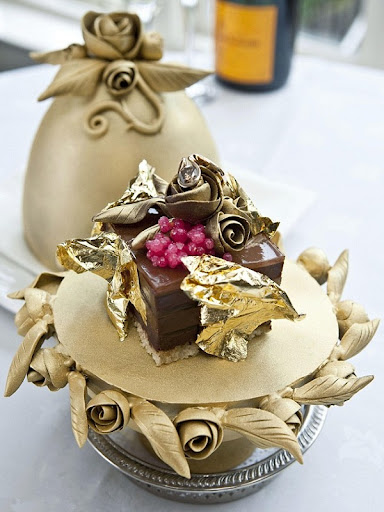 The pudding is finally topped with a two carat diamond instead of the usual cherry. If your taste buds are craving to have one of these $34,000 desserts then you would do well to book one about 3 weeks in advance - since that's how much notice the chef requires.

$34,000 for a dessert??? I wonder how much that is per mouthful? And do you let the waiter lick your dish clean instead of leaving a tip? After all, the monetary value of any smears left behind is probably not insignificant!

Labels: Business and Commerce, Food and Drink, The Mind Boggles
Email ThisBlogThis!Share to TwitterShare to FacebookShare to Pinterest

Dear Lord, please don't let the Obamas hear about this! They'll be ordering a couple of dozen for their next White House gathering of million(please raise my taxes)aire donors.

Considering that chocolate is an independent food group, this should be no problem. Since taking the mystique out of the dessert, you should be able to make this from a box mix from JELL-O for under $5! :)

If this catches on I will create a $hit mining company and become rich.