Out at the Energy Department’s Pantex Plant near Amarillo, Texas, the last of America’s B-53s is in storage. Come Tuesday, it will be dissected: The 300 pounds of high explosives will be separated from its enriched uranium heart, known as a “pit.” The pit will be placed into a storage locker at Pantex, where it will await a final, highly supervised termination. 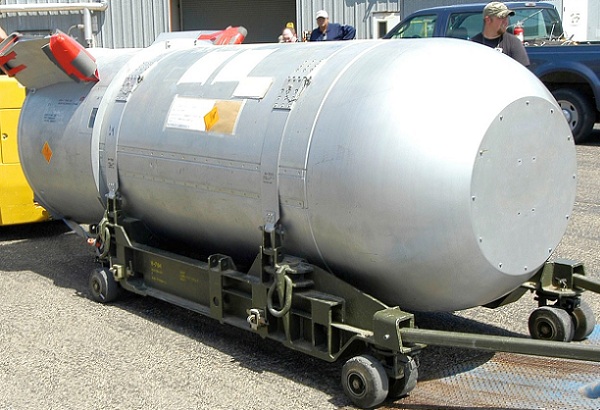 B-53 nuclear bomb at Pantex facility (image courtesy of Wikipedia)

“It’s the end of the era of monster weapons, if you will,” says Hans Kristensen, who directs the Nuclear Information Project at the Federation of the American Scientists.

First brought into the U.S. nuclear stockpile in 1962, the B-53 was so big because it was so dumb. With poor precision mechanisms for finding a target — “Its accuracy was horrendous,” Kristensen says — what it lacked in smarts it made up in strength. The nukes that vaporized Hiroshima were a mere 12 kilotons; the B53 provided nine megatons — 9,000 kilotons — of destructive power.

And it was designed to burrow deep. The B53 wasn’t just any old megabomb. It was the first bunker buster. U.S. nuclear doctrine called for it to be delivered over suspected underground Soviet command-and-control facilities. The dumb bomb wouldn’t destroy them so much as it would destroy everything remotely near it, leaving — literally — a smoldering crater. That was the U.S. plan for “victory” in a nuclear war right up until the implosion of the Soviet Empire.

Wikipedia describes the B-53 as follows:

The warhead of the B53 uses oralloy (highly enriched uranium) instead of plutonium for fission, with a mix of lithium-6 deuteride fuel for fusion. The explosive lens is a mixture of RDX and TNT, which is not insensitive. Two variants were made: the B53-Y1, a "dirty" weapon using a U-238-encased secondary, and the B53-Y2 "clean" version with a non-fissile (lead or tungsten) secondary casing. Explosive yield was approximately nine megatons.

The design that would later be deployed as the B-53 bomb was tested during the Operation Hardtack I series of nuclear tests in 1958. YouTube offers a detailed three-part look at this test series; click the links for Part 1, Part 2 and Part 3. The specific test for the design that would become the B-53 (then known as the redesigned TX-46 device) was Test Oak, conducted on June 28th, 1958. It produced the mushroom cloud shown below (scanned from a 35mm. slide). Note the ships at the foot of the cloud, which provide some indication of its monstrous size - remembering that it was about 40 miles from the vessels! Test Oak produced a yield of about 8.9 megatons. 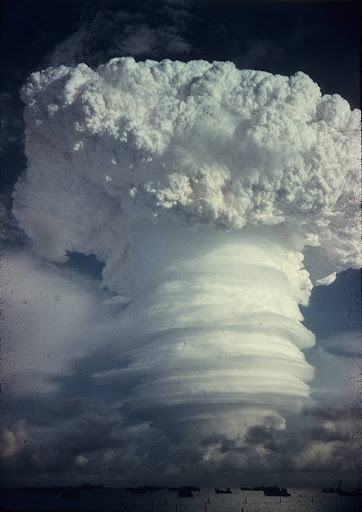 Let's be grateful that beast was never dropped in anger . . .

"“It’s the end of the era of monster weapons, if you will,” says Hans Kristensen, who directs the Nuclear Information Project at the Federation of the American Scientists."

More likely, the end of OUR "monster weapons".