As Lawdog says: "What problem?"


My friend Lawdog opines at some length on the case of the Gurkha soldier who neatly removed the head of a Taliban warlord, in order to have some proof that said warlord had shuffled off this mortal coil. Needless to say, the politically-correct pantywaists who now run things in Britain have been squeaking in horror at the thought.

I can't for the life of me imagine why they're making such a fuss. I've been on a modern battlefield (rather too often for my liking, thank you very much). Have you ever seen what an exploding 155mm. artillery shell, or 81mm. mortar shell, or hand grenade, does to the human body? Think 'hamburger'. Think 'meatloaf'. Think 'pulled pork BBQ'. Do those terms give you any mental images? They're not far from the truth. By comparison, beheading with a traditional Gurkha kukri is a relatively clean, surgical thing. 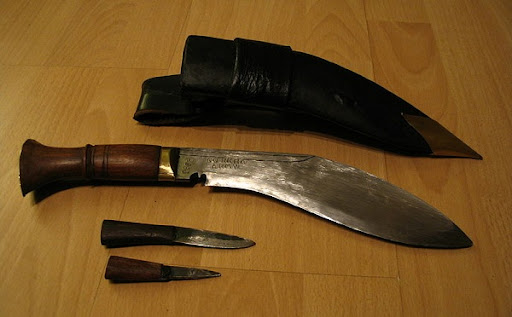 The kukri is renowned for its ability (in the hands of a skilled wielder) to remove the head of a full-grown bullock with a single stroke. I can't imagine a Taliban head honcho proving any more difficult . . . and I doubt the Gurkha who did the deed wasted a second thought on the matter. He did what his father, and his grandfather, and his forefathers for many generations, have done before him.

Civilization's a very thin veneer in all of us, when push comes to shove. You don't believe me? Wait until you land on a battlefield, and you'll find out. I did. The hard way. I second Lawdog's comments, and then some.

If I may be blunt, bringing the head of a slain enemy is a time-honored way of proving said enemy is dead at your hand. The people in a tizzy would likely puke if they knew how their steak dinner came to be a steak dinner.

Um, if you do not really want the bad guy deceased, defunct, freed from this world of tears and toil, et al, then why did you send Gurkhas? How, pray tell, is this less culturally sensitive than turning said baddie into compost? If the decedant needs his head to cross the Bridge of Swords, won't he also need his legs, torso and other various parts? Please enlighten me as to the difference, oh culturally nuanced and sensitive political-type person!

I grew up reading Kipling, John Masters (Bugles and a Tiger), and Viscount Slim. Lesson #1 - If you don't want it done and done well, don't send Gurkhas.
LittleRed1

I'm reading Eugene Sledge's book, With the Old Breed right now. He makes the same observation. That the horror and brutality of the battlefield strips away the thin veneer of civilisation. He relates what the Japanese did to our men, and what Americans did to the Japanese. It was a brutal no holds barred fight, due to the savage brutality of the Japanese soldier. He would rather die than surrender, and was happy to take another to the grave with him. Firing at litter bearers, holding fire until he was sure he would inflict the most damage.

The enemy we face in the current battle is no less motivated. Mr Sledge relates the awful mutilation of our soldiers by the Japanese, and it reminds me of the the terrorists we face today.

If we were better students of history, we'd recognize what it will take to win this current conflict. And if we don't have the toughness to do what is necessary to win, we're in a very difficult mess.

Reading the reports over here in the once Great Britain, The Situation developed after the Taliban had been shot, the instructions to the troops had been to gather DNA evidence to clearly identify the victim,

Prior to gathering the DNA the team came under intense ground fire from Taliban and had to evacuate the area with haste. the enterprising Gurkha simply took the quickest most expedient action to allow identification, off with the head, into a bag and then a fighting retreat.

The Gurkha has been returned to base in Britain pending investigation and trial.