Making the Smart car even smarter!


I'm sure most readers have heard of the Smart ForTwo, a tiny two-seat urban runabout. 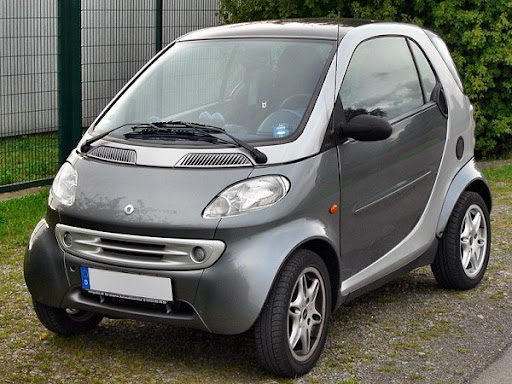 I'm astonished to learn that it's inspired all sorts of modifications, expansions, contractions, and plain bizarre adaptations.

First, someone who appears to be a Battle of Britain enthusiast has painted a couple of Smarts to resemble what he allegedly calls the 'MesserSmart', after the German Messerschmitt Bf109 fighter: 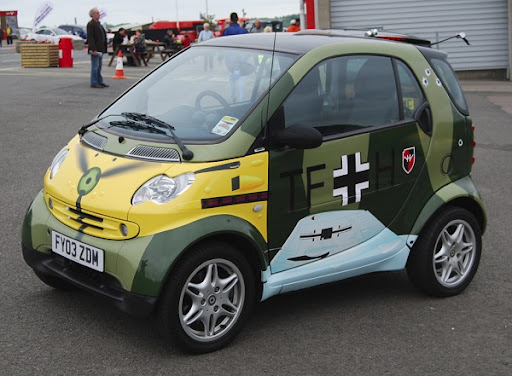 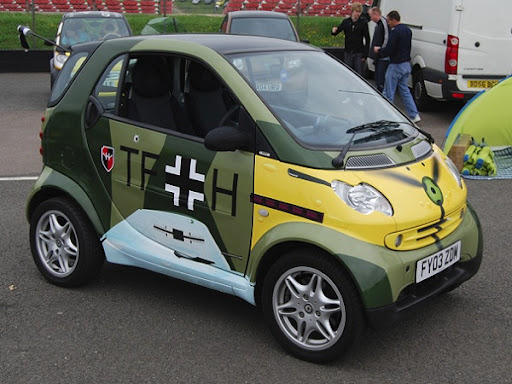 and the 'Smartfire', after the British Supermarine Spitfire. 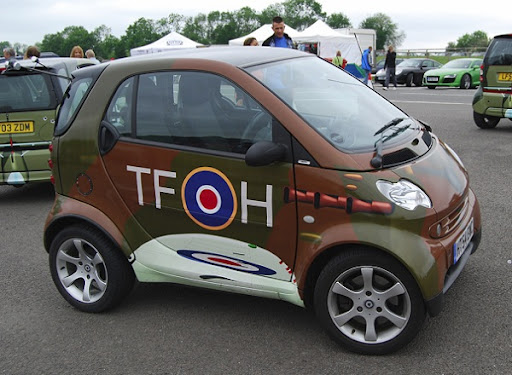 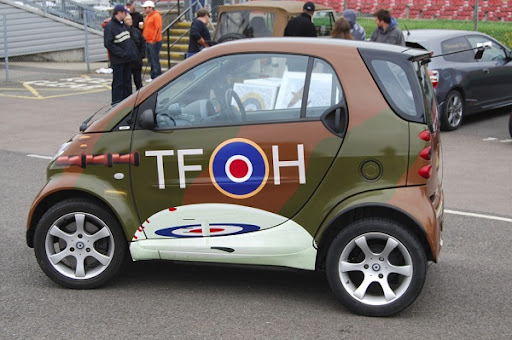 Continuing the martial theme, via Gizmodo we learn of a Smart car that's been modified to resemble a German tank! I'm pretty sure it's not mobile, but it's a nice job, nonetheless. 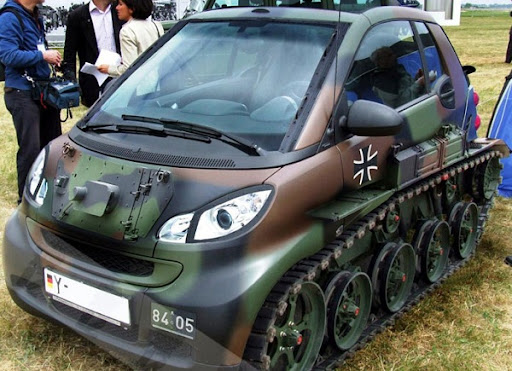 A Smart tank would certainly give good cross-country mobility, but so would a Smart Monster Truck! 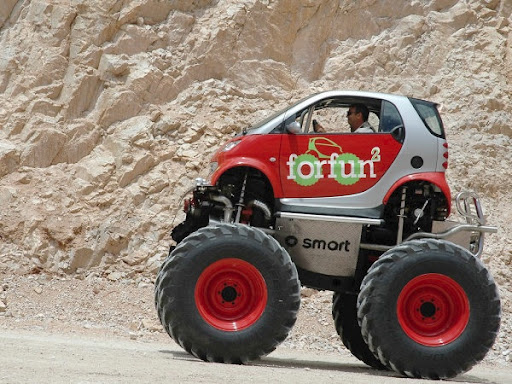 This one's fully mobile. It was developed by Greek rally champion Stefan Attart, who mated the wheels, chassis and engine of a Unimog with the body of a Smart car. (Since both are manufactured by Daimler Benz, I guess there's a certain symmetry there!) Tom Ford of Fifth Gear, a British television motoring program, puts it through its paces in the video below.

That's a high-mobility option, but what if you need more space? Carbonyte Bespoke Vehicle Manufacturers in the UK has that covered. They've converted a Smart car into a mobile advertising and display vehicle by stretching it limo-fashion to a full 17 feet in length. 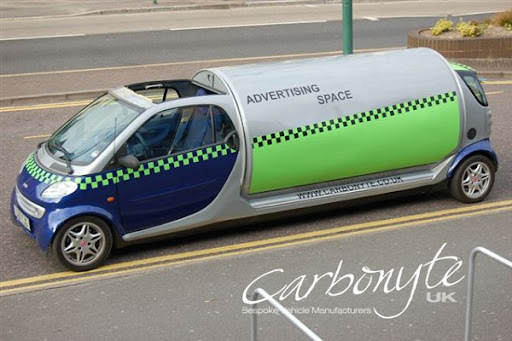 They are calling the end-product a Smaaart car, and they plan on using it as a "promotional vehicle" that includes "a 20:1 scale fibre-glass replica soft drinks can, complete with ring-pull," not to mention all the room made available for all your green accoutrements (think how many solar panels could fit in there!).

If the above photo of the Smaaart left you wondering where you can buy one for yourself, have no fear: the company has plans to sell the car as "an individual yet environmentally-friendly hearse"--whatever that means--for approximately $50,000. It's still a small price to pay for an ungainly, impractical vehicle (I mean, think about how much money people plunk down for a Hummer!).

Inevitably, of course, there are those who want higher performance than that provided by the standard three-cylinder, 698cc. motor, producing up to 61 horsepower. Conversions have been produced in Japan, the UK and Portugal, all using the engine of the Suzuki GSX-R1000 motorcycle or its successor, the Hayabusa.

The first successful conversion appears to have been performed by Japanese company Cruize High Performance. They slotted a GSX-R1000 engine into the Smart ForTwo to produce a very high-performance vehicle. Indeed, judging by the video below, its performance is rather too high for the chassis to cope with in safety!

Another conversion using a GSX-R1000 engine was made by British firm Z Cars. It was commissioned by enthusiast Peter Bee. 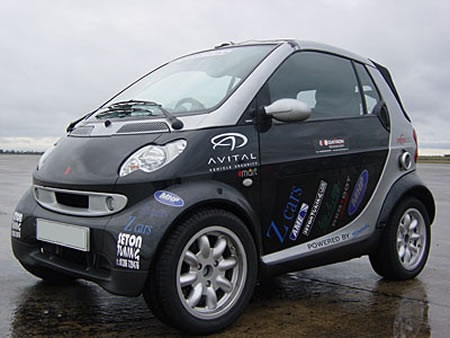 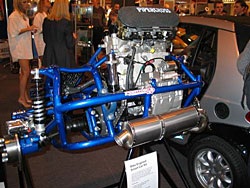 Z Cars had to build a separate frame to house the engine along with a Cosworth differential and complete independent rear suspension. Phil Seton massaged the GSXR until it was putting out a reliable 180hp. Peter built up a full race MHP titanium exhaust system and then created a handmade wiring harness to integrate all of the Suzuki's engine controls along with the tach, the one that goes red around 13,000rpm. Spax made up a set of coil overs with full height and damping adjustments. Then, someone thought they might want to slow this beast down and they added full floating wavy rotors up front with 6 pot calipers and solid wavy rotors in the rear.

They call the finished car the Smartuki. It's the only one in existence and Z Cars is planning to offer it as an option. Does it run? 0-60 in 4.2 seconds, 1/4 mile in 12.4 seconds and tops out at 132mph. Definitely not your average Smart! Peter says running up to the traffic lights at 13,500rpm is always amusing since other drivers move over when they hear what sounds like a bike coming up fast.

There's more at the link. Smartuki conversion kits are now available (for a price).

The Arrepiado team from Portugal took things to the limit, modifying a Smart car with the Suzuki Hayabusa 1,300cc. engine. This monster seems well-nigh uncontrollable for everyday use, although the team's stunt drivers are able to put it to good use for their special effects.

It's certainly not something I'd want to see in normal traffic!

Finally, the MyMBOnline Forums have produced some interesting images (courtesy of Photoshop or a similar application) of what might be done with the Smart concept. All are strictly hypothetical, of course, but they're fun to look at. Courtesy of user Goliath27, we have the 'Smorvette'; 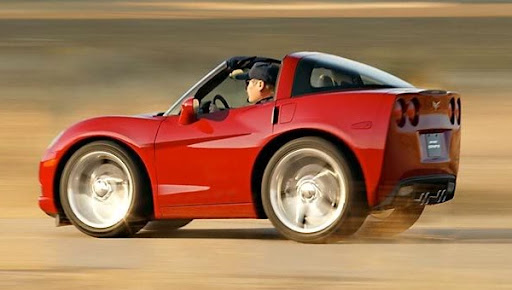 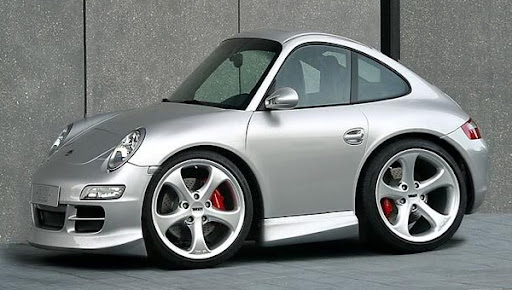 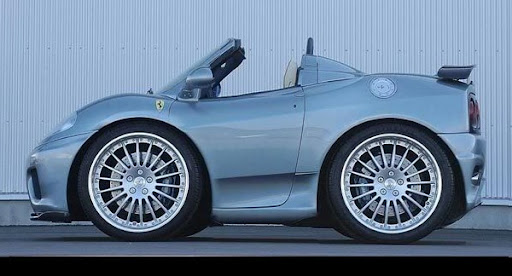 There are more examples at the link. Looks like someone had a lot of fun designing them!

It's amazing what a little imagination can do with - and to - a little car, isn't it?

Well, I wouldn't drive one anywhere but in town... saw the results of a head on between a Smart and a Dodge Ram pickup in NOVA- The Dodge had a dented front bumper, the steering wheel of the Smart was sticking out what was left of the back window. Didn't bode well for driver survival... I've seen a few in DC traffic, they seem pretty twitchy, of course that might also be driver paranoia :-)

Never driven in a Smart, but sat in one. Now, I'm about 5'11", 130 lbs soaking wet, so when I can see the 'C' Pillar in my peripheral vision, my eyes are level with the top of the windshield, and my elbow rests in the center of the passenger seat rather than the center console, then THE CAR IS TOO DAMN SMALL!!!!

What's the best place for a Smart? Downrange of a Ma Deuce, IMHO.

I get the feeling that for adding 180 or so horsepower you've made a not-so-Smart car, but to each their own so long as they're paying for it!