Westboro Baptist Church gets its come-uppance


I'm delighted to learn (via an e-mail from Miss D.) that the bigoted pseudo-Christians of the Westboro Baptist Church, which is led by Fred Phelps and consists largely of members of his extended family, got more than they bargained for when they picketed Comic-Con in San Diego last weekend. Comics Alliance reports:

They've faced down humans time and time again, but Fred Phelps and his minions from the Westboro Baptist Church were not ready for the cosplay action that awaited them today at Comic-Con. 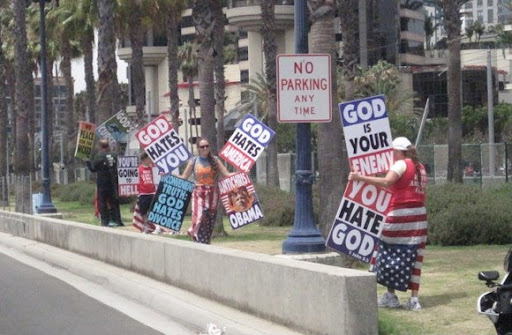 After all, who can win against a counter protest that includes robots, magical anime girls, Trekkies, Jedi and...kittens? 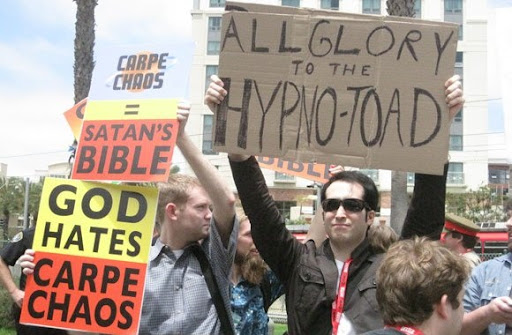 Unbeknownst to the dastardly fanatics of the Westboro Baptist Church, the good folks of San Diego's Comic-Con were prepared for their arrival with their own special brand of superhuman counter protesting chanting "WHAT DO WE WANT?" - "GAY SEX!" - "WHEN DO WE WANT IT?" - "NOW!", while brandishing ironic (and some sincere) signs. 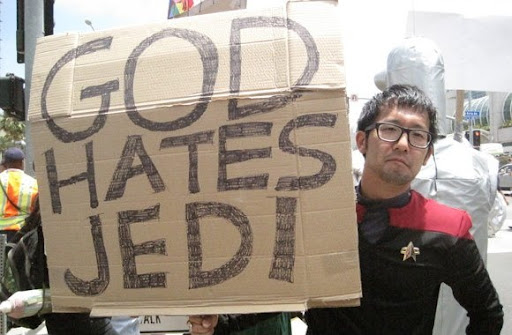 There's more at the link, including lots more pictures. Here's a video report on proceedings, complete with a 'Christ figure' whose comments made me chuckle.

Fred's bunch is wearing the flag. That's wrong in so many ways.

I guess we wouldn't need freedom of speech unless there were people who we'd all rather shut up. Still, what a rotten bowl of fruit that bunch is.

I'm reminded of some of the wittier anarchist protests against the Scientologists in England. Yeeeessss, Phred Phelps picked the wrong crowd to try and harass. He, he, heh.
LittleRed1

I'm with anonymous, saw a blog about those protests, absolutely hilarious. I mean what's the religious response to "longcat is loooooooong" and being rickrolled? :p

The happy nerds' sense of humor and fun gives them quite a thick suit of armor against hatred, which is gratifying to see.

WBC still makes me very sad, though, knowing what a dark place most of those people have been in their entire lives and not knowing any different. It's sobering to know some of those people are his grandchildren.