I'm intrigued by a discovery deep beneath the waters of the Baltic Sea. The BBC reports:

Divers have found 30 bottles of champagne thought to pre-date the French Revolution on the Baltic seabed.

When they opened one, they found the wine - believed to have been made by Clicquot (now Veuve Clicquot) between 1782 and 1788 - was still in good condition.

The bottle - whose shape indicates it was produced in the 18th Century - has now been sent to France for analysis. 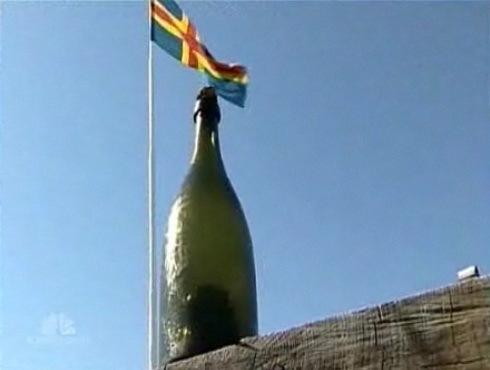 If confirmed, it would be the oldest drinkable champagne in the world.

Diver Christian Ekstrom was exploring a shipwreck on the Baltic seabed when he found the bottles.

He took one to the surface, where he opened it and tasted it with his colleagues.

"It was fantastic," he told the Reuters news agency.

"It had a very sweet taste, you could taste oak and it had a very strong tobacco smell. And there were very small bubbles."

According to records, Clicquot champagne was first produced in 1772 but was laid down for 10 years, the French news agency AFP reported.

Production was disrupted after the French Revolution in 1789.

If the bottles do come from the 1780s, that would make them around 40 years older than the current record-holder, a bottle of Perrier-Jouet from 1825.

In another report, it's stated that the champagne (and all other artifacts aboard the wreck) belong to the government of the Aland Islands, which belong to Finland. The ship's located within the islands' territorial waters.

Unfortunately for eager champagne-bibbers, an Aland marine archaeologist was quoted as saying that "the bottles were 'of great scientific value' and will definitely not go up for sale". Does that mean the discoverers will be penalized for drinking a bottle to check its condition? Or will they put it down to high spirits?