Yes, you read correctly. There really is a World Peashooting Championship. It's held every year in the village of Witcham in England, and this year over 150 competitors showed up for the 40th annual event. 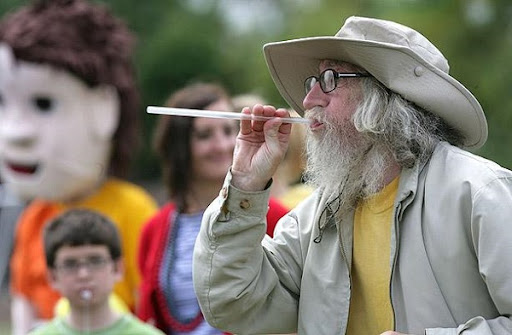 In an age of advanced ballistics, it's tempting to scoff at the humble peashooter – essentially a lung-powered piece of pipe – but technology prospers in improbable places, and there was enough of it at Witcham, Cambridgeshire, to impress the Pentagon.

George [Hollis]'s home-designed device featured a gyroscopic balancing mechanism, a hyper-accurate laser sight, and what he described as "other bits" borrowed from his son's Nintendo. 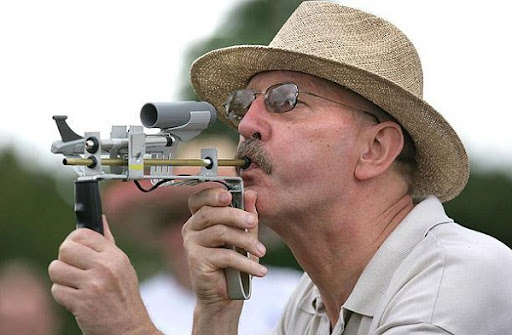 The result is a fearsome piece of kit that has helped him to three world championships.

Contestants have to hit a calibrated target, fashioned out of putty, from a distance of 12 feet. 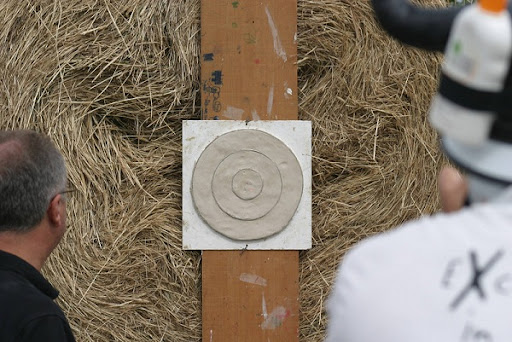 It sounds simple but in shooter circles much debate surrounds arcane issues such as "wind expenditure" (how hard you blow), "moisture criteria" (the optimum amount of saliva on the pea), and "muzzle velocity" (the speed the ammo comes out of the barrel).

"Some people like to shoot the peas individually, for instance, while others prefer to fill their mouth up and fire them all off in a blast." When this happens, it looks like a scene from The Godfather.

"There are precise set standards," explained Steve Ball, a competitor, who also supplies the peas.

"The shooter is 12 inches long, and a competition grade pea must have a diameter of no more than 5.5mm, otherwise it tends to get stuck in the tube and that holds everyone up.

"You want a nice, smooth regular shape, no dimples or wrinkles, so it flies straight through the air."

For this reason the common garden pea is unsuitable, and top competitors use dried maple seeds.

The championships have been held in the village, just outside Ely, for 39 years, ever since local headmaster John Tyson came up with the idea as a way of raising money for the village hall.

The story goes that he had just confiscated a peashooter from a pupil, and was suddenly struck by the thought of what the weapon was capable of. Now hotshots arrive from all over the world in pursuit of the trophy.

The introduction of laser sights – first introduced around a decade ago by an American avionics expert from the nearby Lakenheath US air force base – threw the sport into turmoil, with traditionalists demanding they be banned, and progressives arguing that the competition needed to move with the times. 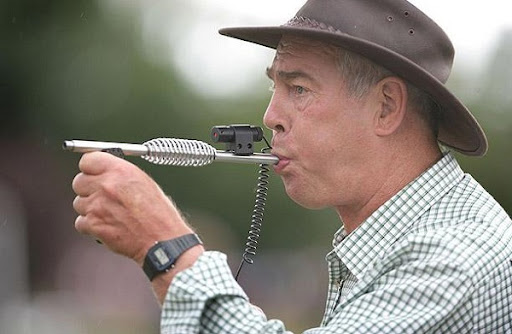 "Actually I think too much is made of the technology," said George, an electrical engineer who lives in Witcham.

"Other things matter more – concentration, preparation, attitude, the right choice of pea. It's an all-round skill, and a lot of people think the old methods are still the best."

The schism remains unresolved, with Saturday's competitors agreeing to a compromise, if not exactly lasting peas.

This year's winner was Ian Ashmeade, a local villager, who was runner-up last year. I don't know whether he used a traditional peashooter or one of the hi-tech versions. Personally, the thought of laser sights and electronic gyro-stabilization on a mere peashooter is a bit mind-boggling, but if that floats your boat . . .

Wait 'til someone figgers out how to add rifling to the shooter barrel.

That's make another tech run as did the laser-sights.