A funeral with eternal complications?


A Romanian family have a difficult problem to deal with. The Austrian Times reports:

Romania's fattest man, Cristian Capatanescu, 54, is to get a post-mortem liposuction so that half of him can be buried in a regular sized coffin - and the other half cremated. 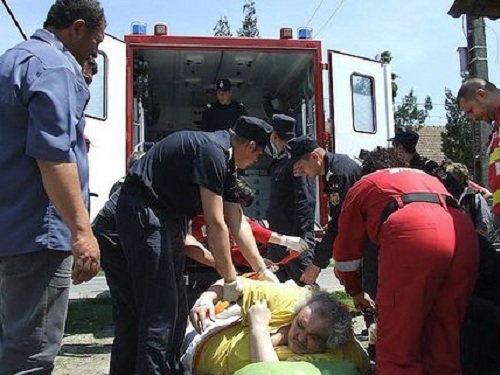 Capatanescu, pictured above being moved by firemen from his home in Ramnicu Valcea, died of multiple organ failure in a Bucharest hospital bed while waiting for doctors to carry out a stomach reduction surgery to help him lose weight. Now relatives have asked if it would be possible for doctors to cut away a few bits anyway so that he will fit in a regular sized coffin. Capatanescu's family say that they cannot afford a large sized reinforced coffin and as a result want to incinerate part of his body - and bury the rest in a regular sized coffin.

His wife told local media they would have two funerals - a traditional burial and also a service for the part of him that was cremated.

Hmm . . . as a retired pastor, this poses an interesting theological problem. At the resurrection of the body, what happens if it's resurrected in two parts? I can see part of Mr. Capatanescu rising majestically from his grave, and the liposucted fat (is 'liposucted' a word? 'Liposucked', perhaps?) wobbling its way skywards from wherever else it was disposed of, and the two bits trying to find one another on the way up!

Just think, if it all goes wrong we can call he Blob Zombie.

Convert the fat to biodiesel, put him in a car, and let the exhaust waft to heaven on its own. Simple!