King's Quest is back!


I wonder how many of my readers remember the computer game series 'King's Quest'? I played several of them during the 1980's, and remember them with fond affection.

To my great pleasure, it's been announced that a group of fans have developed a modern, up-to-date sequel to the series, called 'The Silver Lining'. The Sydney Morning Herald reports:

The Silver Lining is one of the most ambitious fan projects ever undertaken, and will be released in five PC game episodes during 2010. The first instalment, What Is Decreed Must Be, was released on the weekend for free download.

King's Quest creator and Sierra On-Line co-founder Roberta Williams says she is “deeply honoured that a group of devoted fans have dedicated themselves to reviving the characters, lands, and quests of my adventure game series”.

“Without the bravery and persistence of these volunteers, it is almost certain that King's Quest would have been relegated to a forgotten obscurity - its story left untold. Now there is a chance to truly find out what happens to the royal family of the Kingdom of Daventry. I, like many other fans, would like to see how this story unfolds!" 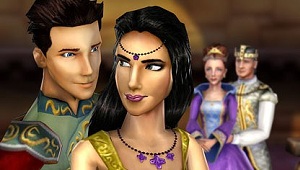 The Silver Lining picks up where Sierra's King's Quest series left off, opening with what should be a joyous celebration in the Land of the Green Isles. But upon the arrival of a black-cloaked stranger, revelry turns to tragedy as the royal twins Alexander and Rosella fall victim to a mysterious curse. Now patriarch King Graham must once again don his feathered adventurer's cap and set out on a quest to save his family.

During the game’s development, Phoenix Online Studios had up to 70 volunteers on its team producing elements like 3D artwork, animation, and an original soundtrack.

"The Silver Lining may have started out as a game made by fans, for fans, but over the years we've been fortunate to assemble an extremely talented team," says designer and producer César Bittar, who was also one of Phoenix Online Studios' founding members. "Creating this game has been an incredible learning experience. Now we're looking toward the future. The Silver Lining is only the beginning."

There's more at the link, including an interview with Ms. Williams.

I'm not into the modern first-person-shooter-type games at all, but this one I'll play with real pleasure! I also note that the original series of King's Quest games (and the accompanying Space Quest series) are available for purchase at a greatly discounted price. They look antiquated and primitive in terms of modern computer graphics, but I might just invest in a set of each, and spend a few happy hours reliving my younger days.

It's one of the great joys of modern computing to be able to play some of these old games without the performance restrictions of days gone by.
I still enjoy many of the Ultima CRPG games.