The Northwest Passage gives up its secrets


As a nautical and history buff, I'm very pleased to learn that the wreck of HMS Investigator, one of the ships dispatched by Britain in 1850 to search for the lost expedition of Sir John Franklin, has been discovered. She lies in Mercy Bay, off Banks Island in Canada's Northwest Territories (circled in red on the map below - click the image for a larger view). 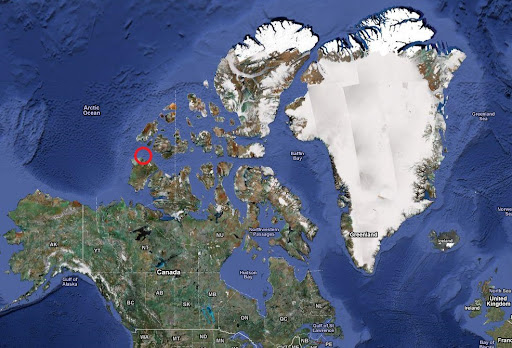 HMS Investigator, skippered by then-Commander Robert McClure, sailed from Britain down the length of the North and South Atlantic Oceans, rounding Cape Horn to enter the Pacific Ocean and sail up the coasts of North and South America. She entered Arctic waters through the Bering Strait between Alaska and Siberia. Almost immediately she became ice-bound in Mercy Bay, where she and her crew were trapped for three years. Other ships of the Royal Navy had entered the Northwest Passage from the Atlantic Ocean, traveling as far as Viscount Melville Sound before becoming trapped in ice in their turn. One of them, HMS Resolute, became the temporary savior of Commander McClure and the crew of Investigator. In 1853, despairing of working their ship free from the ice, McClure and his crew abandoned ship and traveled across the ice, using sledges and skis, until they discovered Resolute in her ice-bound harbor. They spent the next year aboard her.

In 1854, Resolute's crew (along with the survivors of Investigator) abandoned her in their turn, as did the crews of the other ships involved in the search. The crews came together aboard HMS North Star, the tender to the expedition, which had sheltered in a less ice-bound cove off Beechey Island. There she was found by two relief ships, which took aboard some of the survivors to relieve her overcrowding. The three vessels returned to England together.

The historical significance of Investigator's voyage was that her captain and crew were the first persons to traverse the Northwest Passage from the Pacific to the Atlantic Ocean (albeit covering much of the distance on foot over the ice, rather than by ship). In doing so, the McClure Arctic Expedition (as it came to be known) proved that the Northwest Passage did, in fact, exist. McClure was promoted to Captain for his achievements (backdated four years to when he entered the Northwest Passage), and he and his crew shared an award of £10,000 from the British Government (equivalent to well over US $10 million today in terms of buying power).

There's a sequel to McClure's adventures that plays an important role in US politics to this day. The abandoned HMS Resolute was found adrift in an ice floe off Baffin Island by an American whaler, George Henry, on September 10th, 1855. She'd drifted well over a thousand miles from where she'd been abandoned the previous year. The George Henry freed Resolute from the ice and brought her into New London, Connecticut. The British Government generously waived all claim to Resolute on learning of her salvage. The US Government bought the ship for $40,000 from her salvors, restored her, and returned her to Britain as a gesture of goodwill, presenting her to Queen Victoria on December 17th, 1856.

When HMS Resolute was finally retired from service and broken up in 1879, Queen Victoria remembered the courtesy shown by the US in returning the ship to Britain. She had a desk made from Resolute's timbers and presented it to President Rutherford B. Hayes in 1880 as a gesture of thanks for the USA's generosity. The Resolute Desk is today the centerpiece of the Oval Office, used by the President of the United States for all official business. 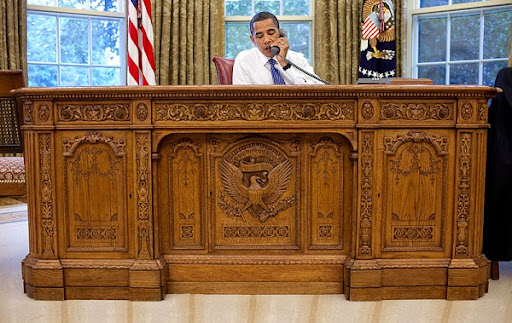 The discovery of the wreck of HMS Investigator is of great historical importance. The Calgary Herald reports:

The wreck of HMS Investigator was detected in shallow water within days of Parks Canada archeologists launching their ambitious search for the 422-tonne ship from this chilly tent encampment on the Beaufort Sea shoreline. 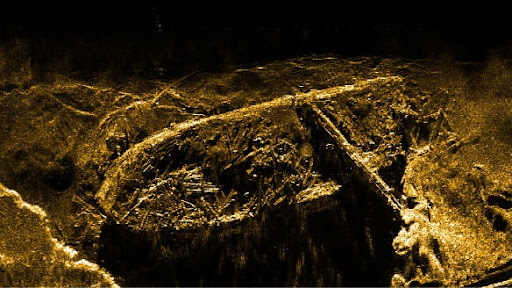 The clear Arctic water makes it possible to glimpse the outline of the ship’s outer deck, which is only eight metres below the surface.

Three graves were also found Tuesday. They are undoubtedly the remains of British sailors who succumbed to disease in the final months of the ship’s three-year Arctic ordeal.

“In anthropological terms, this is the most important shipwreck in history,” said senior marine archeologist Ryan Harris.

“It’s a bit like finding a Columbus ship in the Arctic.”

Finding a relic linked to the discovery of the Northwest Passage represents a reasserted Canadian claim to Arctic sovereignty, says Environment Minister Jim Prentice, who arrived at the camp on Tuesday.

“It’s fundamental to Canadian sovereignty in the North and the tragic tale of Investigator is one of the most amazing stories of Arctic history.”

“It’s a tale of incredible determination and suffering,” Prentice said in an interview.

Climate change in the North gets an assist in the discovery because Mercy Bay was routinely clogged in year-round ice until recently. The first recorded time the bay was ice-free was the summer of 2007.

The three-masted, copper-bottomed Investigator was found this week after marine archeologists deployed side-scan sonars from inflatable Zodiac boats. Underwater cameras will be used later this week to photograph the wreck and divers will be deployed next summer to probe the hull.

Other Canadian teams are searching for traces of the long-lost Franklin expedition. Who knows? Perhaps, over the next year or two, they may solve one of the longest-standing mysteries of Arctic exploration. Let's hope the discovery of HMS Investigator is a good omen for their efforts.

I only knew a little of the history you recounted here. Thanks for the lesson and the primer on current events.

I am totally amazed at a couple lines in the story. This bay was completely clogged with ice, yet, somehow, there is a sailing ship in it? Did the sailors drag that 422 ton ship there, dig through the ice and sink it? How the hammered heck did they do that? I'm confused.

I've always been interested in this kind of discovery. Wow, what tough men it took to search out the world back in the day!!!!

yes, the global warming religion has to put its foot into everything.
Despite logic, beyond thought.

great story, and a part of history I'm afraid was lacking in my comprehension.

STxRynn, don't forget that pack ice drifts over time. Just as HMS Resolute drifted south until found by her salvors, so HMS Investigator probably drifted from where she became trapped in the ice to where she finally sank. She didn't necessarily sail all the way into the bay under her own power. It took her crew three years to abandon her, after all, and who knows how long after that before she finally sank.

Please do not tell Obama about the desk,, he will return it to the Brits.

To those who deny reality: HMS Investigator sailed to this bay in an expectional year, when the bay was unfrozen. Then it became trapped as the next years were colder. Same happened to Erebus and Terror in 1846. It is not that these waters were in the past always frozen, it's that because of rising temperatures those years when they are frozen through the summer are becoming ever more rare, and that on those years that the sea ice melts it does that earlier than what was average in the past, and the overall amount of ice in the area is declining. And so, what was uncommon in the past - Mercy Bay unfrozen - has become common.

And I'm pretty sure that Obama knows about the Resolute table.

Thank you for the clarification. I had my tongue firmly in my cheek when I typed the above comment.

I am still utterly impressed with the mental toughness that it took to go where they went. I don't know if such men are around anymore. Our lives are defined now by thread count sheets.