The State of the US Economy: Part 4 of 5


In the fourth article of this series, I'd like to look at one of the biggest brakes on the US economy: the culture of entitlement that exists in our society. This culture extends through Government programs that cost hundreds of billions of dollars every year, to problems like the 'someone's gotta pay!' tort culture, costing more hundreds of billions every year. It's a general societal malaise that infects a significant minority of the US population.

Let's first look at the 'welfare state'; US government programs aimed at helping the 'less fortunate' or 'less well-off' members of society. Wikipedia defines their scope as follows:

Its main components are mandatory and universal primary and secondary education, somewhat subsidized tertiary education, unemployment and disability insurance, income subsidies for low wage workers, housing subsidies, food stamps, guaranteed public pensions and public health insurance programs that cover roughly 20% of the population but pay approximately 50% of all medical bills nationwide. The Social Security system, which encompasses most social insurance programs is the most prominent part of the American welfare state, and remains the largest government program in the United States and the world.

I'm not against some of these programs; after all, there are those people who genuinely need help, usually short-term but sometimes long-term as well. In the old days, such folks depended on the local church or other civic groups for charitable assistance. Over the past half-century or so, that role has increasingly been taken over by the State in most of the industrialized world. That's not necessarily a bad thing, provided that it's kept within reasonable limits. Unfortunately, pressure groups with their own political and social agendas keep pushing the boundaries of those limits.

Let's take the definition of 'poverty' as an example. I've lived and worked in the Third World for many years. I know what poverty is. I've lived among people whose only shelter was a grass hut erected on a mud-and-cow-dung base; who lived from hand to mouth, often eating only once per day, and that not a nutritionally balanced or satisfying meal; and who possessed only the (ragged, dirty) clothes on their backs, sleeping on straw bundles, covered (if they were fortunate) with one blanket apiece in sub-zero winter nights, huddled together to share body warmth. That's poverty. On the other hand, in the industrialized world, 'poverty' has come to mean something altogether different. It's measured in relation to the average standard of living, rather than to an absolute, survival-level minimum.

In 2005 the BBC published an article examining the changing definition of poverty in the United Kingdom. Here's an excerpt.

What image does the word poverty bring to your mind?

An emblematic image from the third world perhaps? An African famine or children kicking a makeshift football around the streets of a South American shanty town.

Alternatively, you may think of Britain's Victorian past, either through the photographs of the time or the dramas of today; hungry street urchins in rags or farm hands undertaking back breaking work at the crack of dawn.

But according to the people who study these things, poverty is all around - commuters on the bus, the colleague sitting opposite you at work or even the family that own the home next door.

The widely accepted definition of poverty is having an income which is less than 60% of the national average (excluding the wealthiest members of society). On this measure, the proportion of the UK population defined as in poverty is roughly one in five.

And this roughly one in five figure has remained stubbornly high through both Conservative and Labour governments.

In fact, wind the clock back and the percentage of people in poverty has fallen by little over 10% since the first great UK poverty surveys were carried out at the end of the nineteenth century.

But no one in their right mind would suggest that one fifth of the population in modern Britain are as steeped in poverty as their Victorian ancestors.

Essentially, how poverty is measured has evolved. The social scientists have being busy moving the goalposts.

There's more at the link. I recommend reading the article in full in order to understand how modern pressure groups define poverty, and how they try to make the State pay a level of benefits commensurate with their definition, rather than the absolute minimum necessary for survival. People in need are seen as entitled to these benefits, not supplicants begging for a handout.

In 2004 the Heritage Foundation published a very revealing list of how the 'poor' live in the USA.

There's more at the link. Frankly, when I think about the truly 'poor' people I knew in Africa, I reckon most of them would cheerfully commit murder to be able to live in conditions as described by the Heritage Foundation! It would seem like unimaginable wealth to them! Yet, these 'poor people' receive the lion's share of entitlement benefits from the State.

The definition of what's essential also changes over time. For example, earlier this month, Finland expanded the list of its residents' legal rights:

This is, of course, ludicrous in terms of what is 'poverty' or not. No-one's going to starve without broadband! Nevertheless, when poverty is redefined in relation to what the 'average' member of society has, this is the sort of nonsense that results. How long, do you think, will it take for pressure to build in the USA to have broadband access defined as a 'right', and for entitlement advocates to demand that it be provided at government expense to those who can't otherwise afford it? I'm betting months, not years.

I have a real problem, morally as well as politically, with Government programs designed to help people live according to the standards laid out above. That's not poverty relief at all; that's social engineering, designed to redistribute wealth and allow others to live a lifestyle to which they couldn't normally aspire. Is that the function of Government? To a statist or a socialist, yes, it is; but to anyone else, particularly those who believe that Government should take care of the essentials only and leave the rest up to individuals, it's anathema.

Be that as it may, US Government agencies - on both the federal and the state level - will this year spend about $750 billion - three-quarters of a trillion dollars - on welfare and entitlement programs of various types. Comparing this to previous years and forecasts for the next few years, the US Government Spending Web site comes up with this graph: 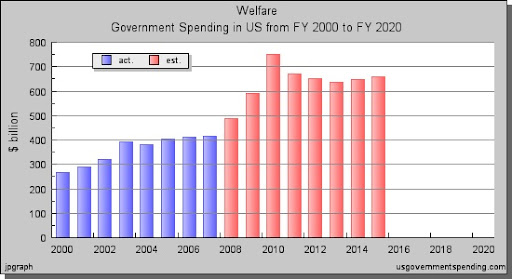 Eye-opening, isn't it? This one from the Heritage Foundation is equally mind-blowing. It shows the expansion in welfare spending from 1929 to 2000. 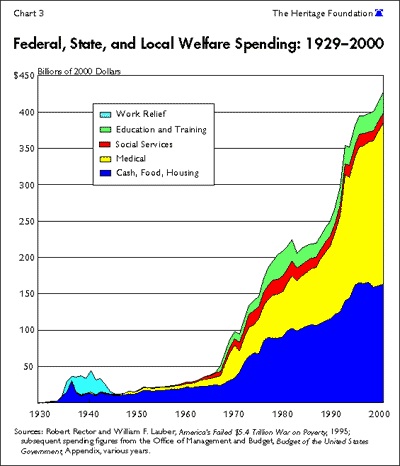 That's a massive redirection of resources from the productive to the non-productive sector of the economy. Some of it is necessary, useful and praiseworthy; but an awful lot of it isn't.

So much for Government spending on entitlements. Let's look at another aspect of 'entitlement culture': the tort system, the litigation that annually costs the US up to 2% of its gross domestic product. It's the product of the 'entitlement culture'; the culture that says 'someone's gotta pay!' if anything bad happens to anyone for any reason, real or imagined.

Towers Perrin, a professional services firm, has conducted regular surveys of the cost to the US economy of litigation and related expenses. Its 2009 survey, the 13th in the series, found: 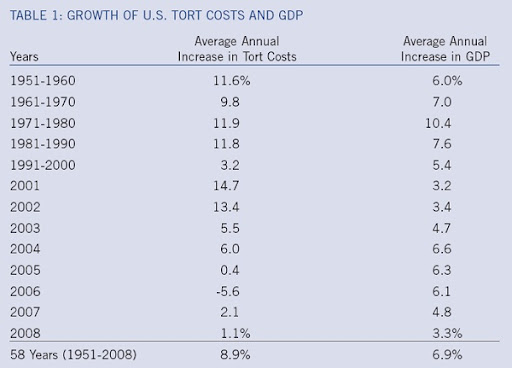 Overall economic growth in 2008 was 3.3%. As such, the ratio of tort costs to gross domestic product (GDP) shrank in 2008, marking five consecutive years of a decline in the ratio. Since 1950, growth in tort costs has exceeded growth in GDP by an average of approximately two percentage points.

I believe the Towers Perrin figures, if only because the trial lawyers of America universally hate, loathe, despise and reject them! When the sharks object to being called out as the carnivores they are, you can be pretty sure the person doing the calling is spot on! As Jim Copeland of the Manhattan Institute has pointed out: "In America, 50% of the money paid by plaintiffs and defendants in civil cases goes to injured parties and 50% goes to lawyers and for court costs."

In case you're wondering how those figures are calculated, the Web site 'Legal Ethics And Reform' has an interesting explanation of direct and indirect tort costs. Read it here. It's worth the time and effort to do so.

So, if you put together annual tort costs and annual Government expenditure on entitlements (and both of those costs are in large measure an expression of the 'entitlement culture'), you come up with a figure of more than one trillion dollars per year spent on entitlements and related issues. This is even before we consider the 'debt bomb' (discussed earlier) or any other aspect of the current financial and economic crisis.

And you're still wondering why our economy's in trouble?