I hadn't realized that the phenomenon of 'mooning' had developed into an annual public spectacle in California; but it seems that every year, on the second Saturday in July, in the city of Laguna Niguel, thousands gather to 'moon' passing trains. The BBC reports:

For 30 years, the city has hosted "Mooning Amtrak" as crowds line up along the railway tracks, dropping their trousers when a train passes by.

Up to 10,000 people take part, and visitors are encouraged to leave their cars at home and arrive by train.

Local legend has it the tradition began in 1979, after a bar room bet.

A drinker at the Mugs Away Saloon, which stands directly across the road from the railway, offered to buy a drink for anyone who would run outside and moon at the next train.

One customer took him at his word, and a ritual was born.

Each year the event grows, with crowds swelled by word of mouth and enthusiastic reports from radio DJs on local radio stations. 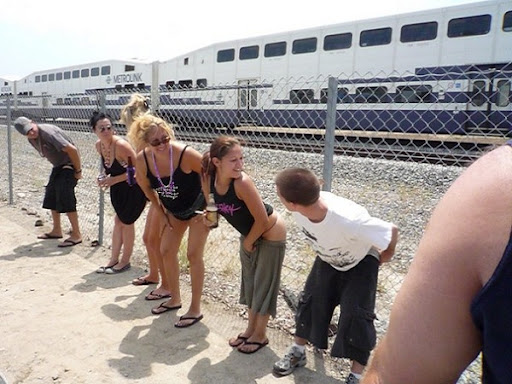 It features directions to Camino Capistrano, the road where trousers and dignity are dropped each year, and helpfully lists train times through the day, so that people can schedule their disrobing.

And after 8pm, there is night mooning. "Bring a flash light with plenty of batteries, or better yet, bring a camping lantern," the website advises.

There is even a "Frequently Asked Questions" section for mooning debutantes. "Can I decorate my butt?" is one FAQ.

I can't help but wonder how the same event would go down in Redneck country. You see, people in these parts are accustomed to discouraging teenage miscreants by loading their shotgun cartridges with chunks of rock salt instead of lead pellets. When one is hit by such a charge (I'm told) the rock salt penetrates to just beneath the skin, and smarts like hell while it dissolves, teaching said miscreants a painful lesson. If we had a 'Mooning Amtrak' festival around here, I'm thinking hundreds of local Rednecks would line up to buy tickets for the trains. They'd spend the day shuttling back and forth, gleefully emptying their salty shotgun shells into the plentifully-proffered posteriors!

Yep, I can just see the advertisement... Rednecks, bring your shotguns and rocksalt... Targets aplenty One day specials!!!

Actually, I'm heartened by the fact that even in the Peoples' Republic of Kalifornia, there are folks willing to publicly mock and disrespect recipients of government subsidies and bailouts. Now if they'd start doing that to Goldman Sachs, GM and Chrysler executives, the SEIU and the UAW...