I'm sure many readers have seen the news report about a yacht in Table Bay, South Africa, that was struck by a breaching Southern right whale. In case you missed it, CNN had this to say:

Paloma Werner, 50, of the Cape Town Sailing Academy, and her partner Ralph Mothes had been watching the whale from a distance in Table Bay, near Cape Town harbor, when it moved toward their 10-meter vessel and breached 20 meters away. 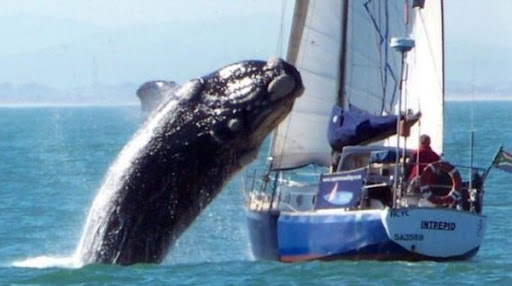 Southern right whales are a common sight in Cape Town waters during the breeding season from June to November, drawing whale watchers to the region. Werner said the couple -- both experienced sailors -- expected the creature to go under the boat before re-emerging on the other side.

"I looked around and I saw this huge whale coming out of the water and smashing against the side of the boat," Werner told CNN. "The whale slipped back into the water but we just saw the mast with all its rigging and everything flying towards us, and that was scary, actually."

Werner said Mothes ducked behind the steering wheel which bore the impact of the mast. And while the masts need replacing, Werner said the steel structure of the boat was undamaged. "Miraculously nothing happened to us," she added. 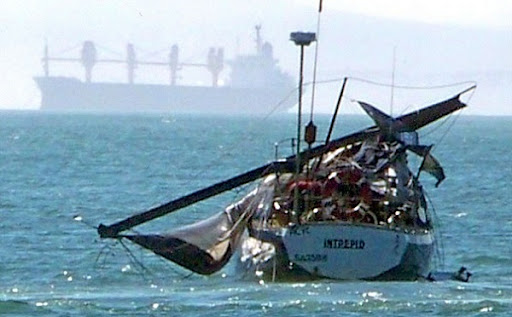 A tourist on a nearby boat captured the moment when the whale breached out of the water on camera.

Werner said she had spoken to a local marine mammal expert who had told her that the incident was a "freak accident." Because the couple had been sailing without the engine on, the whale had failed to hear them, she said.

"It was a young southern right whale and he was just having fun. They have very poor eyesight and obviously if they're breaching visibility is very poor. The whale did not intend to attack us, it just did not hear us."

I was particularly interested in this story because I know those waters well. I've sailed out of the Royal Cape Yacht Club on many occasions aboard small craft, and I've watched the whales in Table Bay frolicking (particularly when the young calves have been born and are learning to play). I'm not surprised to hear of a young whale striking a yacht like this. If there's no engine or other noise-making device to alert them, the whales don't know that a boat's in the vicinity. The adults will have learned to look around, not just listen, but the juveniles have to learn that lesson the hard way!

I doubt the whale was badly hurt; it's protected by thick layers of blubber and a tough skin. Apart from a severe bruising, it should be fine. It's a good thing that was a steel-built yacht . . . a fiberglass hull would almost certainly have been fractured, leading to the vessel sinking. Still, it'll cost a pretty penny to replace the mast and rig. I wonder what the insurance company will say when they read the cause of loss?

Right whales are also not... the brightest branch on the Cetacean tree. I know at least one researcher, speaking anonymously, once described them as being in trouble because they are "too f***ing stupid to get out of an oil tanker's way".

All the more reason for a regular deck watch duty of tossing cherry bombs over the rail at regular intervals.